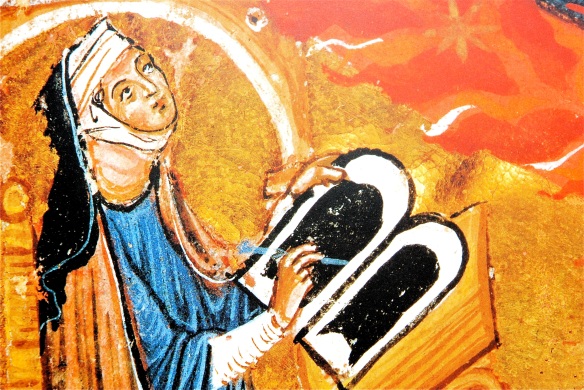 When I was 42 years and 7 months old, a burning light of tremendous brightness coming from heaven poured into my entire mind. Like a flame that does not burn but enkindles, it inflamed my entire heart … just like the sun that warms an object with its rays.

So wrote Hildegard of Bingen, a twelfth-century abbess, artist and activist whose feast is celebrated today. In a society where women were more seen than heard, it took her a long time to find an outlet for her voice. She had experienced visions ever since her childhood, but she kept them mostly to herself until she was in her forties. Her reticence wasn’t just due to social pressure. She also shared the self-doubting anxiety of every artist. Did her visions matter? Would the world understand or care? But as every artist knows, if you have a gift and don’t make it visible, it will sicken and die within you, and your own body will suffer the effects.

And Hildegard in fact became a sickly woman: “Not in stubbornness but in humility, I refused to write for so long that I felt pressed down under the whip of God into a bed of sickness.” But at last she overcame her inhibitions. Her call was too strong to resist. She began to write, and compose, and produce paintings of her visions. Her body was restored to health, and from then on, she tried to live the life only she could live.

In one of her visions, God told her: O how beautiful your eyes are when you tell the divine story!

Tell the divine story: That was the work she had been given to do. In addition to the normal duties of a medieval abbess in the Rhineland, Hildegard became a storyteller, a musician, an artist, a writer; and through all these media she obeyed the command given to every artist, to “make visible what, without you, might never be seen.” She was also an activist, reminding the powerful to show compassion to the poor, and railing against clergy who failed to blow “the trumpets of divine justice.”

Hildegard was always mindful of the source of her creativity:

The marvels of God are not brought forth from one’s self.
Rather, it is more like a chord, a sound that is played.
The tone does not come out of the chord itself,
but rather, through the touch of the musician.
I am, of course, the lyre and harp of God’s kindness.

The bright-colored enigmas of her illustrated visions, painted by others under her supervision, are unlike anything else in western medieval art. Figures embedded within circles or mandalas express her experience of God as being “like a wheel, a circle, a whole, that can neither be understood, nor divided, nor begun nor ended … just as a circle embraces all that is within it, so does the Godhead embrace all …. You are encircled by the arms of the mystery of God.”

Hildegard’s music was as original as her images. Her compositions resemble the Gregorian chant of her time in their liturgical form and musical modes. They also conform to plainchant’s suppression of extroverted individuality for the sake of devotional calm. At the same time, they go beyond traditional chant in several ways: her melodies have an exotically wide range, often spanning two octaves, with sudden leaps from low notes to high notes; her texts are rhapsodic outpourings of strikingly original imagery; and her songs possess a freedom and exuberance that reflect an artist on the loose.

Her music wasn’t primarily a form of personal expression. It was a manifestation of deepest reality. “O Trinity, you are music, you are life,” she prayed. For Hildegard, “all of creation is a song of praise to God.”

She didn’t make up her songs; she listened in to the music of heaven:

Then I saw the lucent sky, in which I heard different kinds of music, marvelously embodying all the meanings I had heard before. I heard the praises of the joyous citizens of heaven, steadfastly persevering in the ways of Truth; and laments calling people back to those praises and joys; and the exhortations of the virtues.

This was more than metaphor, as her writings make clear. Her compositions came to her whole, given by God, much like the auditory mysticism of St. John the Divine, who wrote in the Book of Revelation: “And I heard a voice from heaven like the sound of many waters and like the sound of loud thunder; the voice I heard was like the sound of harpists playing on their harps, and they sang a new song before the throne.”

Hildegard believed that the music of heaven is in us and all around us. We have been created to harmonize with it. “The soul is symphonic,” she said.

She conceived a charming image of Adam before the Fall: he sang with a voice of pure honey, and the devil knew that as long as Adam managed to remember the sweetness of the heavenly songs, he could never be tempted. So with Adam, as with all of us who have come after, the devil set out “to trouble or destroy the affirmation and beauty and sweetness of divine praise and of the hymns of the spirit.”

In Hildegard’s opera, Ordo Virtutum, an allegory of the virtues, all the characters sing – except the devil, who can only heckle and shout. The devil’s work is dissonance, the shattering of harmony.

Hildegard once had a dispute with the bishops of her diocese, who tried to force her submission on a matter of principle by forbidding her nuns to take communion or to sing the liturgy. It was a terrible ordeal for her community to live without music. Hildegard remarked at the time that those who choose to silence music in their lifetime will go to a place where they will be “without the company of the angelic songs of praises in heaven.” It was her discreet way of telling the prelates to go to hell.

Every artist has to deal with philistines, but we can be thankful that Hildegard’s enormous gifts were for the most part supported by her contemporaries. She fell into obscurity for centuries after her death, but she returns anew to our own time with a voice we long to hear, a voice resonant with compassion, a voice aflame with justice, a voice attuned to the divine harmony for which all of us are made.

Sometimes Hildegard seems to live in a different universe than we do, a universe alive with multi-sensory evidence that God is “burning everywhere,” that everything in the world is dense with meaning and liveliness.

All the senses, in her universe, deliver this message to the receptive soul. Unlike the purely material universe proposed by modernity, a happenstance of mute objects and dead space, Hildegard’s universe was sacramental, alive with significant presence.

In one of her visions, a human figure stands in the center of a cosmic wheel. This Christlike image of Divinity declares to her and to all the world:

I, the highest and fiery power,
have kindled every spark of life …
I, the fiery life of divine essence,
am aflame beyond the beauty of the meadows.
I gleam in the waters. I burn in the sun, moon and stars.
With every breeze, as with invisible life that contains everything,
I awaken everything to life.

Is this not the high calling of every saint – and every artist?
To awaken everything to life.
To set our imagination aflame.
To make visible the unsurpassable beauty of God.

As Simon Weil put it so well in our own era,

A sense of beauty, although mutilated, distorted, and soiled, remains rooted in the human heart as a powerful incentive… If it were made true and pure, it would sweep all secular life in a body to the feet of God.