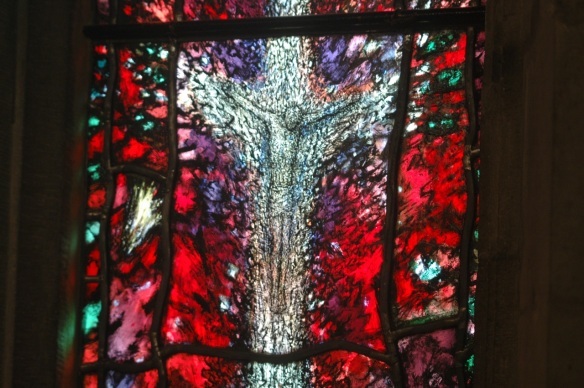 President Obama began his eloquent and moving eulogy for the Rev. Clementa Pinckney with a New Testament reference: “The Bible calls us to hope. To persevere, and have faith in things not seen … We are here to remember a man of God who lived by faith. A man who believed in things not seen.”[i]

According to physicists, 95% of the known universe is hidden from human observation. In reviewing a recent book on the subject of invisibility, Kathryn Schulz writes that the “whole realm of the visible is governed by the invisible … we can see a fragment of the what of things, but nothing at all of the why. Gravity, electricity, magnetism, economic forces, the processes that sustain life as well as those that eventually end it – all this is invisible. We cannot even see the most important parts of our own selves: our thoughts, feelings, personalities, psyches, morals, minds, souls.” Her conclusion sounds a note of causality which Aquinas would have admired: “Our planet, our solar system, our galaxy, our universe: all of it, all of us, are pushed, pulled, spun, shifted, set in motion, and held together by what we cannot see.”[ii]

Most of that invisibility is an inherent property of the unseen, but to that imperceptibility we human beings contribute our own forms of blindness. Some of that blindness is benign and adaptive, as we protect ourselves from sensory overload by only seeing what is necessary or unusual. But we also suffer moral blindness, closing our eyes to things we would rather not see, many of which the President boldly named in his oration.

“For too long,” he said, “we’ve been blind to the way past injustices continue to shape the present.” Blind about poverty, blind about racism, blind about our criminal justice system, blind about the unconscious impulse “to call Johnny back for a job interview but not Jamal.” As the congregation took up the cry – for too long! – he added, “For too long, we’ve been blind to the unique mayhem that gun violence inflicts upon this nation. Sporadically, our eyes are open: When eight of our brothers and sisters are cut down in a church basement, 12 in a movie theater, 26 in an elementary school. But I hope we also see the 30 precious lives cut short by gun violence in this country every single day; the countless more whose lives are forever changed — the survivors crippled, the children traumatized and fearful every day as they walk to school, the husband who will never feel his wife’s warm touch, the entire communities whose grief overflows every time they have to watch what happened to them happen to some other place.”

But it wasn’t just evil which became visible in Charleston. We also saw an answering goodness. As the philosopher Alfred North Whitehead insisted, “The kingdom of heaven is not the isolation of good from evil. It is the overcoming of evil by good.” When evil occurs, it is “met with a novel consequent as to issue in the restoration of goodness.”[iii] This novel consequent has taken many forms in recent days, most dramatically in the costly expressions of forgiveness by those so cruelly bereaved. It was not what the world expected to see.

“Oh, but God works in mysterious ways,” the President reminded us. “God has different ideas … Blinded by hatred, the alleged killer could not see the grace surrounding Reverend Pinckney and that Bible study group — the light of love that shone as they opened the church doors and invited a stranger to join in their prayer circle. The alleged killer could have never anticipated the way the families of the fallen would respond when they saw him in court — in the midst of unspeakable grief, with words of forgiveness. He couldn’t imagine that.”[iv]

Inspiring words, received by an inspired congregation. If we ever wonder whether church is worth the bother, do we need more evidence than Charleston? The radical forgiveness and faith we have witnessed there are not accidental. They have been uniquely forged and nurtured over time within a community of biblical witness, shared practice and common language. Church is where God’s friends do the collective work, generation after generation, to preserve and evolve the repertoire of faith in our stories, our praises and our actions.

Without church, we wouldn’t know how to name – or sing – “amazing grace.” We would lack the eyes – and the language – for “things unseen.” Without church, the President could never deploy Scripture with such resonance, or begin to sing a beloved hymn in the assurance that he would not have to finish it alone.

[iv] The full text of President Obama’s eulogy for the Rev. Clementa Pinckney on June 26, 2015, is widely available on the Internet.