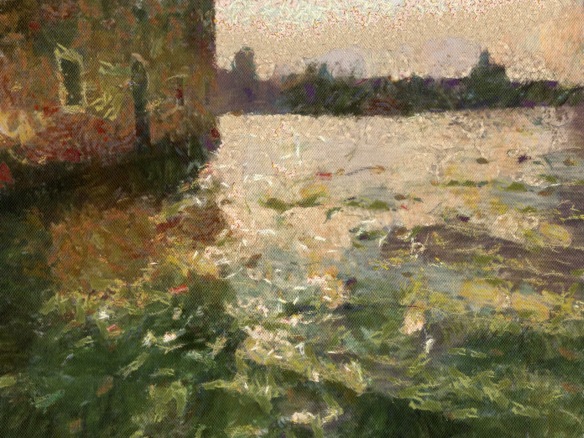 The greatest thing a human soul ever does in this world is to see something, and tell what it saw in a plain way. Hundreds of people can talk for one who can think, but thousands can think for one who can see. To see clearly is poetry, prophecy, and religion – all in one.

John Ruskin, the influential Victorian oracle on all things pertaining to the visual arts, had a particular passion for Venice. As a young man, he made repeated visits to analyze and record, in words, drawings and watercolors, the endangered architecture of the place he described as “a ghost upon the sands of the sea, so weak, so quiet, – so bereft of all but her loveliness, that we might well doubt, as we watched her faint reflection in the mirage of the lagoon, which was the City, and which was the Shadow.”[iii]

A city floating on the sea, a mirage of reflections and watery light, an endless play of surfaces and mazes, seems more imagined than built. Ruskin’s fevered description of San Marco celebrates this fantastic evanescence:

… as if in ecstasy, the crests of the arches break into a marble foam, and toss themselves far into the blue sky in flashes and wreaths of sculptured spray, as if the breakers on the Lido shore had been frost-bound before they fell, and the sea-nymphs had inlaid them with coral and amethyst.[iv]

Artists, writers, and dreamers have long made pilgrimage to Venice not just to admire its beautiful treasures, but to be immersed in its spectral fancies, a provocative analog for their own imaginative processes. When a small group of Christian creatives gathered there for the Venice Colloquium in late October, we arrived with that same longing for inspiration and discovery.

Our collective intention was to “dream the Church that wants to be.” It was born of a shared sense of urgency about the state of imagination in the common life of God’s friends. In my last post, I wrote that “the practice of holy imagination is like a sanctuary lamp in the life of the Church. If not duly attended to, it is in danger of going out.” In a week of group conversations and Venetian wanderings, we tended the flame as best we could.

We had little interest in being theological spin doctors, cranking out persuasive messages or illustrative answers. Art is not argument or propaganda. Its purpose is not to answer questions, make a point, or silence doubt. The artist should not know what is going to happen when she goes to work. One of our group, a painter, said, “I am not trying to get a message out with my work, but to evoke a deep experience. What right do I have to impose my meanings on the incredible lives of other people?”

“Church,” said another, “has become the place where you go if you know, rather than the place to find out. It has become the place of the answer instead of the question.” Could we possibly abandon the project of collecting the best answers and devote our attention to curating the best questions? Where would that lead? Would we just get lost in the maze of unknowability? Or as the Psalmist says, is there anywhere we can go where God is not?

When we discussed the drag imposed on creativity by the institutional rage for order, the young leader of an “emergent” Christian community spoke up: “I want a wild church, where things are out of our control.” For Christians concerned about communal stability and institutional sustainability, that might sound like a recipe for chaos. But as our sacred stories remind us, chaos is prelude to creation. And if anyone thinks the Church is not in need of some serious re-creation, they aren’t paying attention.

The worship spaces of Venice, with their monumental forms of marble and mosaic, their exuberant decoration, their Bellinis, Titians, and Tintorettos, express a religious confidence that is nearly incomprehensible to our own time. More frequented by tourists than believers, they seem like gorgeous tombs for an expired past. Then what shall we say when the prophet asks: Can these bones live? 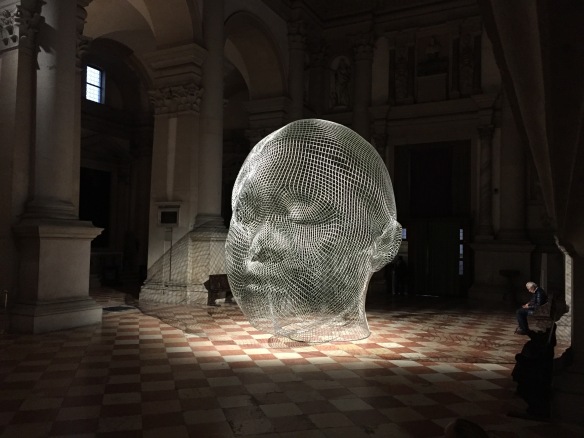 One Sunday morning I attended mass at San Giorgio Maggiore. There were less than forty people present in its vast interior. But as soon as the liturgy ended, many more people began to stream into the church. They had come not to worship, but to experience a contemporary art installation, part of the Biennale art exposition taking place throughout the city. A giant head, made of thick wire, faced the altar from the nave. Consisting of far more empty space than substance, it was a ghostly, immaterial presence, in but not of this world. A great golden hand, suspended over the crossing, bestowed upon that serene and mysterious face a perpetual blessing. 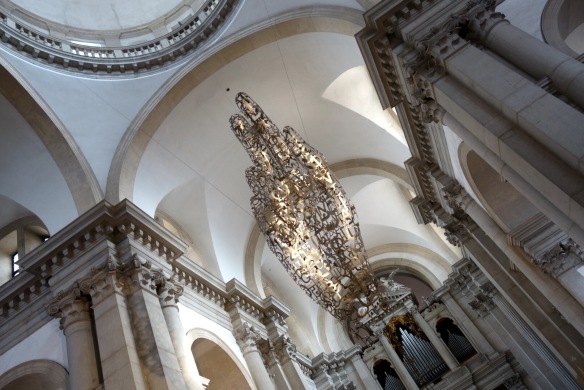 The contrast between the sparsely attended mass and the popular artwork could be interpreted as a simple duality of irreconcilable opposites: religion vs. art, old vs. new, moribund vs. vibrant, neglected vs. popular. But that would be too facile, ignoring the deep connections between the artwork and the worship space it inhabited.

It was not accidental that the head, modeled on a girl of Chinese and Spanish ancestry, faced the altar from the nave, like any common worshipper, or that the blessing hand mimicked the gesture of countless priests who had presided in that place for a thousand years. The work couldn’t be detached from Christian ritual without evacuating much of its meaning.

At the same time, there was something universal about a blessing hand and a receptive face. The extreme magnification of head and hand functioned like a cinematic close-up, focusing on the act of blessing in isolation from any specific ritual context or tradition. We didn’t see the vested body of a Catholic priest, or encounter the sociology of a local congregation. We only saw a hand that blesses and a face that receives. For me, the elemental humanity of this universal gesture reinforced rather than replaced the meaning of Christian blessing.

So instead of a rivalry between art and religion, there was a conversation, in which each informed and enriched the other. An explanatory text said that Jaume Plensa’s artwork, entitled Together, employed “a metaphorical language that will connect people of many faiths and of no faith.”

The conversation between art and religion, and among artists of many faiths and no faith, can only be tentative and experimental in an age of fragmentation and doubt. It will also be wild and unpredictable. If any of our small group came to Venice thinking we might collectively forge a vision of what the Christian artist is called to be in such a time, in such a Church, we were soon awakened from that fond dream. There will be no manifesto from the Venice Colloquium. We have returned to our homes with no answers, only more questions. And some lasting images.

Another Biennale work, Rashad Alakbarov’s The Union of Fire and Water, provided particular inspiration. As part of an installation evoking the turbulent political history of Azerbaijan, an array of swords and daggers was arranged in such a way that a message was created from their shadows: Do not fear. The instruments of violence and death had been transformed into an utterance of encouragement and hope. It was reminiscent of the Arma Christi, where the implements of Christ’s suffering become symbols of salvation.

Through the play of light and shadow, the handwriting on the wall was there for all to see. For artists out on the road of unknowing, with the voices of caution and order tugging us backward lest we lose our way, it seemed like a word from heaven. Do not fear. 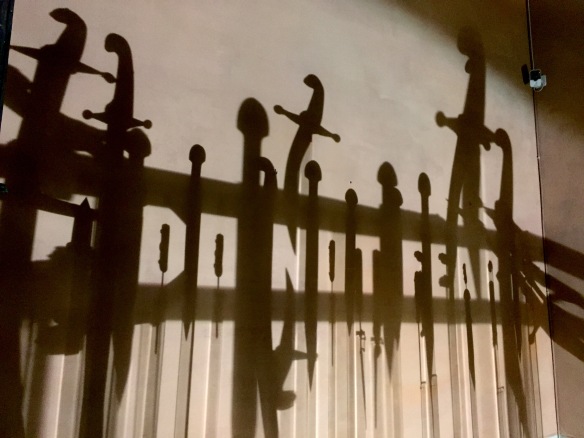 Rashad Alakbarov, “The Union of Fire and Water”

5 thoughts on “Do not fear: Reflections on the Venice Colloquium”