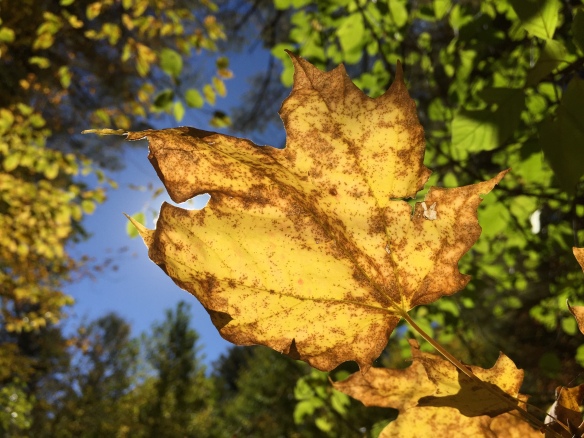 Can all men, together, avenge
One of the leaves that have fallen in autumn?
But the wise man avenges by building his city in snow.

For the past week, I have been exploring the back roads of New England with my wife as we fill our eyes and hearts with October color. There have been cloudy days when the leaves have glowed like embers in the somber light, and days of utter brilliance when the sun made them shine like stained glass.

What Wallace Stevens called the “auroras of autumn” is one of the glories of the year. It is also, inevitably, a masque enacting the narrative of mortality in which we all play our part. As I wrote in “A Tender Doom,” a 2014 post, the “leaf falls, the year dies, the heart submits to processes beyond its control.”

This week I have watched leaves of gold and scarlet fall upon ravaged 18th century gravestones, and drop into ever-rolling streams which bear them away to God knows where. I have received news of a dear friend slipping out of this world as her husband of 71 years finished reading her the last rites from the Book of Common Prayer. I have also read the faithful witness of another friend, facing chemo, binding himself to the love that casts out fear in a time of anxious unknowns. He is a wise man who does not confuse the fight to live with a fight not to die, lest he turn living “into something less spiritually interesting.”

To paraphrase a line from poet William Stafford:

What the leaves say,
that is what I say.