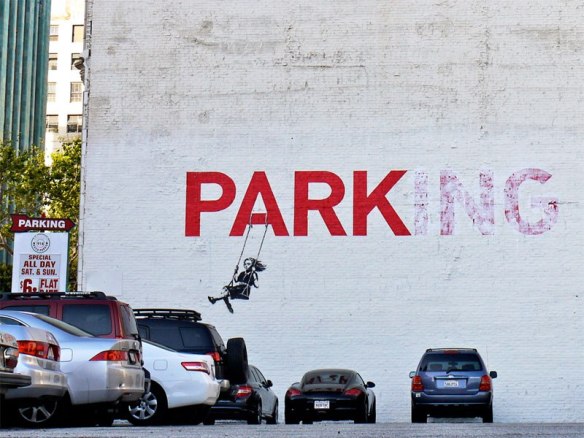 Then I saw a new heaven and a new earth.

We can’t create a world we haven’t yet imagined. Better if we’ve already tasted it.

At the Last Supper, with less than 24 hours to live, Jesus took the time to go around the room and wash the feet of every disciple. Then he asked all of them to do the same when he was gone. “You must wash each other’s feet,” he said. “I have given you an example so that you may copy what I have done to you” (John 13:14-15). He could have been speaking metaphorically. Maybe “wash each other’s feet” simply meant that they should always serve one another in loving humility.

But I suspect Jesus wanted them to repeat the footwashing not just as a reminder of his message, but because there is something you can only learn when you kneel at the foot of another, take their foot in your hands, and pour water over it. And there is something you can only know when you let someone kneel before you and minister to you as a living icon of Christ, who emptied himself and took the form of a slave.

Thankfully, the Church has preserved footwashing in its Holy Week rituals, and every year this archaic act, with its egalitarian model of mutual love, posits its quiet but tangible challenge to the social order. In our own time, Pope Francis has used the rite to embrace the marginalized, including prisoners, immigrants and Muslims. Church history abounds with similar examples.

In medieval England, some of the poor were invited into the Canterbury cloister every Maundy Thursday afternoon. Then the monks would make an entrance, each standing face to face with one of their impoverished guests. An eleventh-century text describes the remarkable scene:

Then the prior shall strike the board thrice at the abbot’s command,
and genuflecting and bowing down they shall adore Christ in the poor.

Once each monk had washed and dried the feet of the person before him, he bent to kiss each foot with extraordinary reverence. As C.S. Lewis once put it: Next to the Blessed Sacrament itself, your neighbor is the holiest object presented to your senses…for in him Christ is truly hidden.

One of my favorite footwashing stories took place in Madrid’s Royal Chapel in the mid-nineteenth century. The king and queen entered dressed in all their finery. Seated on two separate platforms were twelve poor men and twelve poor women, all of them old, dressed in fresh clothing provided by the monarchs. The king knelt to wash the men’s feet while the queen, adorned with white mantilla and diamond diadem, did the same for the women. And while the queen was washing one woman’s feet, her diamond bracelet slipped off her wrist into the basin of water. The poor woman reached down to retrieve it, and held it out to the queen. But the queen told her, “Keep it, hija mija; it is your luck.”[ii]

I don’t know what was in the queen’s heart at that moment, nor is there any record of the poor woman’s thoughts. The incident was only the briefest ripple on the placid surface of the status quo. The social order quickly resumed its accustomed injustice, and the queen probably had plenty of spare diamonds in her chamber. Her generous act may have been little more than a display of superior power and wealth.

Still, it was a tiny crack in the accustomed order, offering a glimpse of a better world beyond the consensus reality. Jesus knew what he was doing when he told us to keep washing each other’s feet. Rinse, repeat. Maybe someday the ritual’s radical implications will dawn on us and we’ll work to change the way we live together.

Activists have a term for what Jesus did in the footwashing: prefigurative Intervention. It is an action which dissents from the dominant order by showing a different way of being and relating. Beautiful Trouble, a handbook for creative activism (reviewed in my last post), describes it this way: “The goal of a prefigurative intervention is twofold: to offer a compelling glimpse of a possible, and better, future, and also––slyly or baldly––to point up the poverty of imagination of the world we actually do live in.”[iii]

Instead of a direct assault on the existing order, create an alternative experience attractive enough to lure people toward something better. This is the premise underlying the Eucharist, where an alternative world of welcome, inclusion, abundance and communion is proposed at least once a week around the world.

Hakim Bey, a Sufi poet, scholar, and “anarcho-immediatist,” has called for the creation of “temporary autonomous zones”–– “an eruption of free culture” where alternative futures may be experienced, if only briefly. Instead of simply waiting for large-scale historical change to arrive, why not create ephemeral spaces and moments where something different can be experienced? “Are we who live in the present doomed never to experience autonomy, never to stand for one moment on a bit of land ruled only by freedom?”[iv]

A simple example would be PARK(ing) Day, when people in American cities put enough coins in parking meters to buy curbside spaces for a day, turning them into a mini-park with a tiny pool, a little jazz lounge, or some other variation where people can discover a different way of inhabiting public space in a temporary respite from automobiles and bureaucratic planning. More elaborate and challenging “prefigurative interventions” were the famous encampments in Wall Street and Tahrir Square, enabling large numbers of people to imagine that another reality might be achievable.

As the writers of Beautiful Trouble make clear, the “idea is not to paint a pretty picture full of rainbows and unicorns, but to put forward a fragment of something visionary, desirable, and just beyond the realm of the possible––and in such a way that your action calls out the vested interests making it impossible.”[v]

One of my favorite examples is a series of intervention called “small gifts.”  The one described in Beautiful Trouble––“take what you need, give what you can”–– created a space for “conversation and generosity” in a busy shopping area. The three British artists who curated this action sought answers to the following questions:

What would our world look like if we exchanged gifts rather than money?
What is the value in speaking to strangers?
What if we focused on giving as much as we can rather than as little?

They set up a dining table and chairs in a busy shopping area, and made one hundred tiny envelopes containing a one-pound coin, a written question, and an invitation to use the coin to make, find or buy something to bring back to the table. Then the artists began to offer the envelopes to passersby. Anyone who accepted an envelope became part of the conversation. And if they then used their coin to bring something back to the table, they were asked to share the question in their envelope to prompt conversation with those already there. And all were welcome to share in whatever was on the table at the moment. 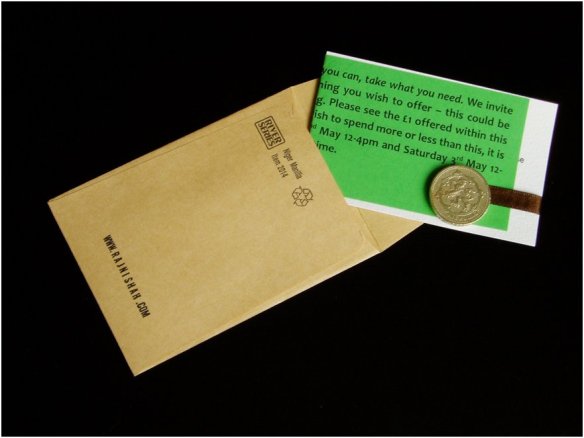 “Give what you can, take what you need” gift envelope with pound note (Photo by Rani Shah)

This improvised sharing of food, conversation and gift-giving not only created community in a place of alienation and anonymity, it stimulated rich exchanges about “generosity, value and ownership” while avoiding the divisiveness of overt political discourse.[vi] It was also, I would suggest, an enacted parable of the heavenly banquet.

The Church is always wondering how to do its work in the world. It’s not enough to stay within our walls and hope the world drops by from time to time. We need to take our gifts into the wider community, to make prefigurative interventions in intentional and creative ways. Some churches do “Ashes To Go,” anointing busy urbanites on street corners and transit stations on Ash Wednesday. Others offer to wash the feet of strangers on Maundy Thursday, or celebrate the eucharist in parks with the homeless. Some join forces with community leaders and organizers to serve the poor, alleviate hunger and homelessness, and advocate for political change and economic justice.

These are all really great ministries, but I hope we will also be inspired to go beyond what we already know and do, to invent a whole multitude of imaginative and alluring ways to interrupt the blind sufferings of history with temporary resurrection zones and divine interventions. We need both to learn from and collaborate with the artists and creatives who are already out there ahead of us, announcing in their own diverse idioms that God’s future is not only on its way, it might already be available in the here and now.

[i] Beautiful Trouble: A Toolbox for Revolution, “Assembled” by Andrew Boyd with Dave Oswald Mitchell (New York/London: OR Books, 2016), 84

[ii] James Monti, The Week of Salvation: History and Traditions of Holy Week (Huntington, IN: Our Sunday Visitor, Inc., 1993)