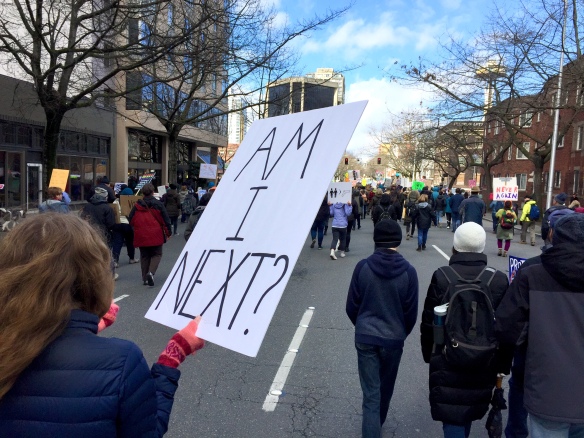 History says, Don’t hope
On this side of the grave.
But then, once in a lifetime
The longed-for tidal wave
Of justice can rise up,
And hope and history rhyme.

Heaney’s powerful words seem the perfect epigraph for this amazing day, when hundreds of thousands of people In over 800 communities took to the streets to say “enough is enough.” Enough shootings!  Enough victims! It’s time to heal our national gun-sickness. It’s time to choose life.

Have we finally reached a turning point? We’ve seen countless turning points come to naught. We have become well accustomed not to “hope on this side of the grave.” But this new movement, led by highly committed young people not yet practiced in the art of resignation, does feel different. Could this in fact be one of those rare moments, like the end of apartheid or the fall of the Berlin wall, when “hope and history rhyme”? 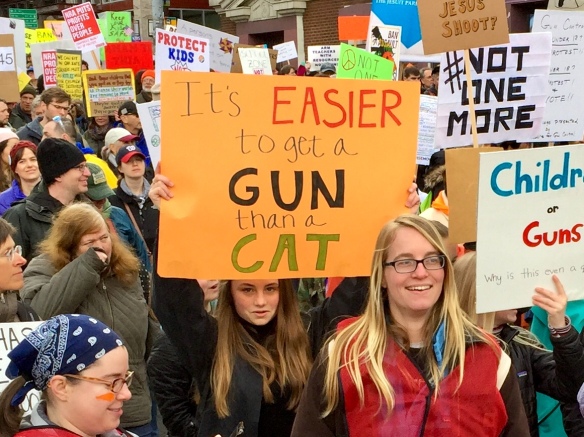 In “Summoning the Sanity to Scream,” posted in the wake of Orlando, I wrote:

Gun worship seems the most powerful religion in America. From presidents to schoolchildren, the blood of countless victims stains its altars. And however much we rage and moan we feel powerless to stay the hand of sacrifice.

After the joy of marching with thousands of beautiful fellow citizens in the streets of Seattle, and later viewing media excerpts of the utterly compelling young voices at the demonstration in Washington, D.C., I felt myself being awakened from the deadly illusion of inevitability. I began to let myself hope again. The kids are leading the way out of the Slough of Despond. How can we not follow? 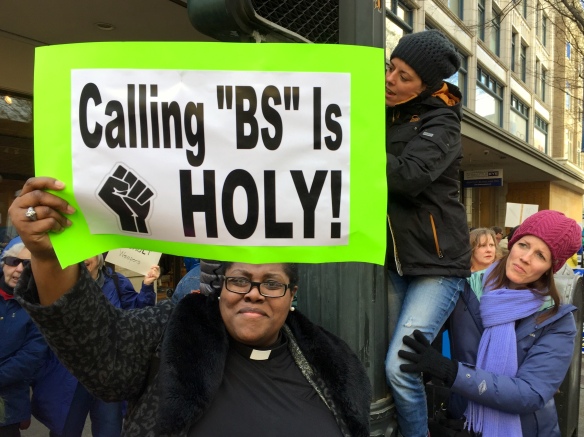 I was especially moved by Emma Gonzalez, a senior at Parkland’s Marjory Stoneman Douglas High School. Already well known for her prophetic cry against the NRA and its political puppets (“We call BS!”), she began with a brief, heartbreaking roll call of her seventeen dead friends. Then, remaining at the podium, she stood in solemn silence for a very long six minutes––ritually enacting the excruciating duration of the mass shooting.

Ms. Gonzalez had not explained her silence in advance, nor had she invited the crowd to observe it with her. Many in the crowd of 800,000 were undoubtedly bewildered by such an exercise, periodically filling the uncomfortable silence with shouts of “We love you, Emma,” or chants of “Never again.” But the camera also showed many faces mute and tearful. It was a risky liturgical move to immerse that vast multitude in such a long silence (almost unendurable for talkative Americans!) without any advance consensus on its intention or meaning. Those weren’t a million Trappists out there. As far as I could tell from the video, she more or less pulled it off, never quite losing them. I suspect that many will be haunted by the experience for a long time to come. You can watch it here. 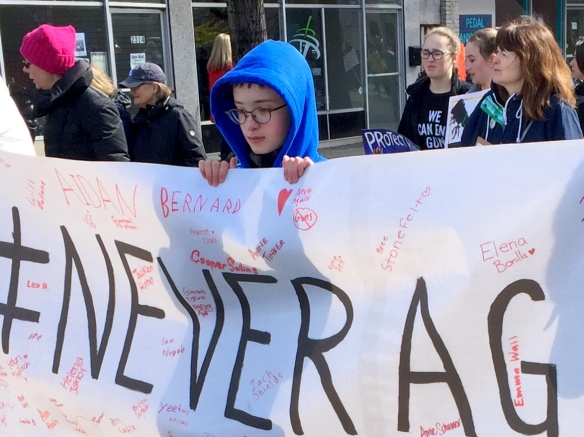 It is late, I am tired from a lot of walking, and I hesitate to reduce what happened today into a few concluding paragraphs. Something great happened out there, and let’s leave it at that for now. But I am prompted  to make a brief digression before signing off.

As a priest on the eve of Holy Week, I could not help making connections between today’s events and what Christians will be doing over the next eight days. How could I not carry echoes of today’s joyful urban processions into tomorrow’s commemoration of Jesus’ entry into Jerusalem? Both processions involved cheering crowds envisioning a better world; both posited fundamental challenges to the established powers. As for the fate of today’s crowds compared to the one in first-century Jerusalem, I suspect there are crucial differences as well. While every human dream must endure repeated crucibles of resistance and setback, I suspect that the kids on the streets today will not replicate the failures of the Palm Sunday crowd. In that sense, they may prove to be more like Jesus––enduring faithfully with their eyes on the prize––than like the fickle crowd whose “hosannas” turned so quickly to “crucify.”

The other connection I’m thinking about tonight is Emma Gonzalez’s six-minute silence. Founded on an original experience of unimaginable pain and loss, it created a space where suffering might be both remembered and transcended. Like the rites of Holy Week, it engaged the past as something never to be forgotten, something that is intrinsic to the story, but in the context of a future which can contain and redeem whatever has been lost. We all dwell in the provisional space between memory and hope, where we neither forget nor give up. There is always more to our story than we can ever know. Even in the darkest night, God continues to imagine the dawn. 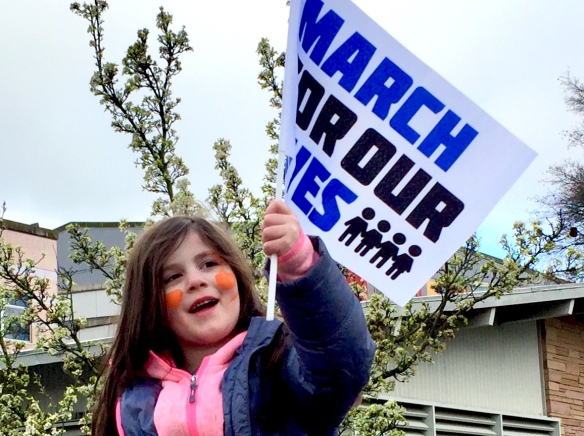 At the Easter Vigil next Saturday night, one of the stories we will tell is the deliverance of the biblical Israelites from the powers that enslave them. Instead of an adult reading the story from the Bible, children will act out the Exodus from Egypt. When they reach the Red Sea (adults blocking their way with waves of blue fabric), the congregation will shout “No way! No way!”–– like Congress telling the kids to give up and go home. But Moses will raise his staff, a way will open through the sea, and the Israelites will cross over. One will be carrying a “Never again” sign; another will wear a “March for our lives” T-shirt.

Once they are safely across the sea, Miriam, Moses’ sister, will reflect on what has happened, concluding with a declaration of faith:

“The world says NO.
The power of God is YES!”

The Murderous Hypocrisy of Thoughts and Prayers

Summoning the Sanity to Scream

12 thoughts on “March For Our Lives: When Hope and History Rhyme”