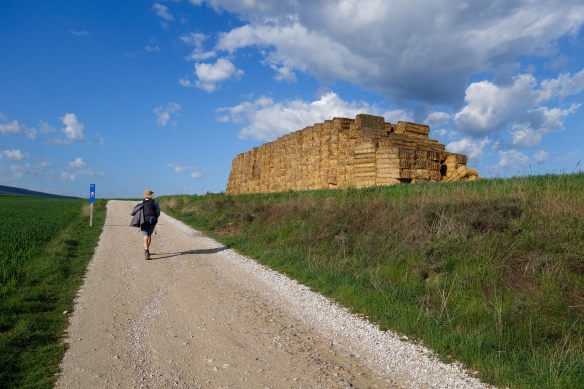 The Religious Imagineer is five years old this week. It began during my 500-mile pilgrimage on the Camino de Santiago in the spring of 2014, with dispatches on miles I walked, things I saw, people I met, thoughts I had.

No great views today, but the summit where France turns to Spain was a brooding cloud of unknowing where we walked by faith not sight. (April 8, the first day)

Crossing the Pyrenees on the first day.

The land through which we pilgrims passed today was painted with a few strong colors: dark green wheat, yellow mustard, blue sky, white clouds. Those four colors filled the eye in every direction, with no lesser hues to dilute the effect. To wander through such a scene was a glorious thing. Whatever else the Camino brings, I will have had this day. As a German woman said as she passed me by, “Cherish every step! Cherish every step!” (April 11) [A 30-second video of my shadow moving along the Camino]: If you want to experience the length of my walk in real time, replay this video 27,000 times. (April 25)

Few trees, big sky, only occasional villages, and long stretches where the only human presence was the long procession of pilgrims migrating westward. The lack of distractions and variations tends to make the very act of walking to be the mind’s principal occupation. As Robert Macfarlane puts it in The Old Ways: A Journey on Foot, walking becomes “sensational” – it isn’t just conducive to thought, it becomes the form thought takes. I walk, therefore I am. Perhaps it is similar to the way that cinema thinks through the movement of the camera. It isn’t forming propositional thought, but is simply absorbing through its attentive motion the shape of the world, the textures of existence. (April 29)

There are many along this road who began it as a form of athletic challenge or youthful adventure or unusual vacation. And many will finish it that way. But in talking with those who profess no religious intention, or who are dismissive of Christianity as something they outgrew, I still hear the spiritual language of pilgrimage breaking through the verities of secularism. One has lost a job and is trying to discern a meaningful alternative. Another is trying to listen to her life from a place of unknowing. Another has no answer to the question of why he is walking, but still presses on to Santiago. To borrow a phrase from the great Spanish mystic, John of the Cross, every pilgrim is trying to arrive at a place we know not by following a way which we know not. (May 1)

Halfway to Santiago, a Camino friend was feeling some pain and discouragement on a particularly demanding stretch. But then he saw a handwritten sign: “Don’t give up before the miracle.” (May 7)

But can I, having now trod 478 miles in 31 days, really claim any kind of illumination or transformation as a result? I still get annoyed by the loud and incessant talkers who mar the tranquility, I still get angry when a speeding truck comes close to knocking me into a ditch. I have yet to perfect the pilgrim equanimity urged by my guidebook, which sees every irritation as the sand that produces the pearl. But at least I try to make these things part of my walking prayer. As the monks say of life in the monastery, “We fall down and get up, fall down and get up …” (May 9)

This morning I performed the final Camino ritual: climbing the stairs behind the altar to hug the gleaming metal effigy of Santiago. Despite the cool hardness of the sculpture, it was strangely comforting. I whispered in the saint’s ear: “Thank you for the beautiful voyage.” (May 12)

Statue of St. James behind the high altar, Cathedral of Santiago.

After I reached Camino’s ultimate end in Muxia, on the western shore of northern Spain, my blog just kept on going, continuing its own pilgrimage to God knows where, reporting as it goes. I have written about theology, spirituality, liturgy, poetry, the arts, cinema, music, politics, culture, nature, seasons, time, death and resurrection. My topics––and my influences––may be eclectic, but I trust my Christian faith and Anglican temperament to lend some coherence to these verbal wanderings.

In that spirit, I borrowed my blog’s subtitle from T. S. Eliot’s Four Quartets: “Where the fire and the rose are one.” This union of contraries––passion and tenderness, danger and beauty, wild instability and serene form––draws upon Dante’s imagery in the Commedia. Fire is purgation, divine light and the flame of love. The rose, perhaps inspired by the rose window of an Italian cathedral, images the heavenly city, containing a multitude of saints within its harmonizing circle. Dante unites flame and flower in his image of the Virgin, whose “womb relit the flame of love––/ its heat has made this blossom seed / and flower in eternal peace” (Par. xxxiii.7-9). In the unfolding future of God’s not-yet, the fire and the rose will indeed be one.

In The Religious Imagineer’s first five years, there have been 237 posts, 61,913 visitors and 92,870 views. My ten most viewed posts so far have been:

1) The ten best Jesus movies (Jan. 6, 2015)–– I have taught Jesus movies for years, and find cinematic gospels, despite (or because of?) their flaws, to be fascinating case studies for questions of biblical representation and interpretation, as well as Christology.

2) Members of the same body? A post-election homily (Nov. 10, 2016) –– “Can we truly delight in each other, make others’ conditions our own, rejoice together, labor and suffer together? In one of the darkest moments in American history, this is the work we have been given to do.”

4) A deep but dazzling darkness (Aug. 25, 2017) –– My account of the 2017 eclipse, seen through the lens of mystical theology, continues to find readers almost every day. It has been viewed on more total days than any other post.

5) You can never go fast enough (Sept. 9, 2014) –– This mix of classic cars, road trips, nostalgia and eschatology got a huge amount of traffic when it became a WordPress editors’ pick.

6) 7 spiritual practices: a to-do list for the time of trial (Nov. 18, 2016) –– This brief guide to engaging the powers of darkness without losing our own souls remains all too relevant.

7) Dreaming the church that wants to be (Oct. 7, 2015) –– Eleven Christian artists gathered for 10 days in Venice to imagine a rebirth of wonder among God’s friends. This prologue, and the several posts that followed it, emerged from that quest.

8) The ten best religious films (Oct. 8, 2014) –– “Most of these films refuse the usual manipulations and excitements of mass cinema, and demand a contemplative mind. Transcendental style can be as rigorous as prayer.”

9) The spirituality of running (Aug. 4, 2016) –– A subject dear to my runner’s heart. “What we do with our bodies manifests and expresses inner states, the sacred ground of our being. But bodily practices can also induceinner states. How we move, how we sit, how we breathe, can all make a difference in our spiritual life. Inner and outer are intertwined and interactive. We pray in, with, through our bodies.”

10) Hospital for the soul (April 24, 2014) –– One of my earliest posts concerns a house of hospitality where pilgrims find momentary respite from the Camino’s onward rush. “Everyone is welcome here,” I was told, “but it’s not for everyone. Many people hurry along the Camino who show little interest in the work of the soul.”

Of the top ten, three are on spiritual practice, three are about movies, three are about widely shared experiences (the Camino, the eclipse, and our current political “time of trial”). And three include a number in the title, always a hit with the search engines!

If you want to explore further in these writings, enter a subject in the Search box, such as “Cinema,” “Nature,” “Liturgy and worship,” or “Imagination,” and you will find a range of selections. Or as we enter Holy Week, you might try “What Shall We Preach on Easter Sunday?” (currently featured in the April 10 issue of The Christian Century) or “Just a dream?­­––Reflections on the Easter Vigil.”

I am grateful to you, dear readers, for joining me in this journey of words and thoughts over the past five years. I deeply appreciate your attentive reading and supportive comments. And if you would like to help me expand the reach of this writing ministry by sharing your favorite posts now and then (share buttons are at the bottom of individual posts), that would be an awesome anniversary gift!

And now, as we say on the Camino, “Ultreia!” (“Let’s go further!”). In the days to come, I will always strive to be worthy of your time. 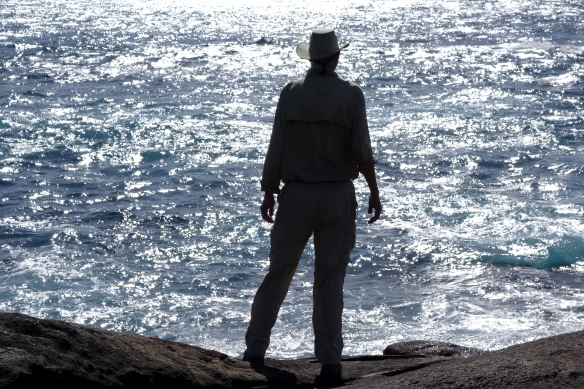 The author at Camino’s end in Muxia.

All photographs by Jim Friedrich