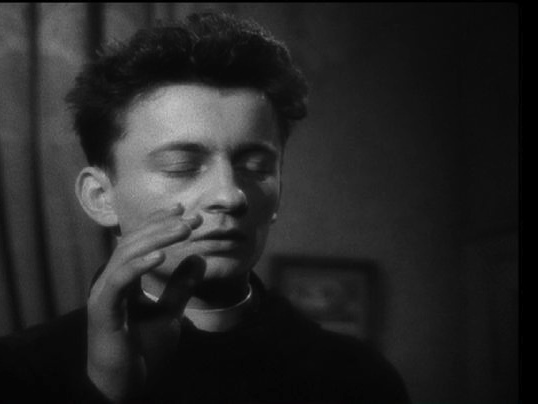 A man goes into a butcher shop and says, “Give me your best piece of meat.” And the butcher replies, “Everything in my shop is the best.” (Zen story)

Top ten lists are inherently fraudulent. By what authority do I declare what is best? And by what criteria? And which religion? But if I had titled this post, “Ten compelling films which engage religious questions from a [mostly] western Christian perspective,” it wouldn’t be nearly as much fun. We love rankings, if for no other reason than the pleasure of argument.

My list is totally subjective of course, and infinitely revisable, depending on the day, or where I am in my life (although Robert Bresson’s Diary of a Country Priest has topped my list every since I first saw it in Ann Arbor 45 years ago and subsequently had to wander around for a couple of hours on a rainy night until I was capable of returning to ordinary life).

I have restricted myself to one film per director (or else Bresson would take up about six places, and Tarkovsky a few more, etc.). I have also stuck to the western Christian tradition, with the Russian orthodoxy of Tarkovsky the one exception.

And while there are many films with spiritual subjects or theological themes, I have focused primarily on examples of what Paul Schrader calls “transcendental style” – films which are not just about religious experience, but themselves create religious experience in the viewer, through cinematic form and language as much as story. Icon writers know this well. There’s a lot to say about transcendental style, but for now let me simply cite Susan Sontag’s remark about Robert Bresson: “His form does not merely perfectly express what he wants to say. It is what he wants to say.”

All these films are available on DVD or Blu-ray, and I hope you will be encouraged to explore them. But I must warn you that not all these films are equally accessible. Most of them refuse the usual manipulations and excitements of mass cinema, and demand a contemplative mind. Transcendental style can be as rigorous as prayer. But as Iranian director Abbas Kiorastami has said, “I would rather see a film that might even bore me in the act of watching but that later I can’t stop thinking about, than a film that keeps me on the edge of my seat and then is immediately forgotten.”

1) Decalogue (Krzysztof Kieslowski, Poland 1988)   This extraordinary cycle of short films explores various lives within a single apartment block, whose grey concrete bleakness exudes the alienation and melancholy felt by many of its residents. It is the world after the Fall, when instinct and intuition no longer suffice to guide human living. Each film is roughly based on one of the Ten Commandments, but the imperatives of each situation are far from clear. Choices matter intensely (it is not such a godless world that one can do anything one wishes), but most of the characters are bewildered and beset by the questions before them. And yet – grace happens, people connect, souls find mercy. Not every time, but enough to keep alive the hope that God – embodied by a mysterious figure who always seems to be around at key moments – has not abandoned us.

2) Diary of a Country Priest (Robert Bresson, France 1950)   Bresson pares away everything inessential to show the story of a soul. The miracle of his “transcendental style” is that he shows us not so much what people do as who they are – not through explaining them psychologically, but by letting their mystery be. As with iconography, a kind of inexpressiveness on the surface allows hidden depths to shine through. As the priest walks his own Stations of the Cross, the sorrowful way becomes a revelation of grace. This is not a film about religious experience – it is religious experience.

3) Ida (Pawel Pawlikowski, Poland 2013)   Is the religious life purely a product of environment, or is it indelibly inscribed on the heart? In 1962, a young novice, raised as an orphan in her convent, is sent into the world to visit her only living relative, just prior to taking her final vows. Will her vocation survive outside the cloister? The people she encounters, the discoveries she makes about her past, the suddenly viable prospect of a life in the outside world – all present her with new options for her life and vocation. One of the many beauties of this film is that neither the convent nor the outer world are judged. Both are viewed with sympathy and respect. Until she decides her future, Ida is shown off center, at the edge or bottom of the frame. But in the film’s final shot, she is perfectly centered at last.

4) Into Great Silence (Philip Gröning, Germany 2005)   The director spent 6 months in residence at a Carthusian monastery in the Alps, filming monastic life and worship. Using only natural light, he shows us a numinous world of shadows pierced by the radiance of windows and candles. Dwelling in this world of prayer and silence for nearly three hours, we slow ourselves to the monastic rhythm, and emerge refreshed and centered, and thankful for those who give their lives to providing, as Dan Berrigan once put it, “large reserves of available sanity.”

5) Magnolia (Paul Thomas Anderson, USA 1999)   Is the world only a confusion of chance and arbitrary choice, or do providence and purpose exist? Is the universe a matter of chaos or love? Anderson explores the possibility of connection, pattern and grace in the intersecting lives of many different characters, all of whom are in some way broken, wounded or lost, casualties of a city (Los Angeles) which, like the biblical Egypt, has produced countless captives and victims. In one unforgettable scene, nine of the characters are shown, each in their particular condition of need and supplication, singing along with the soundtrack, Aimee Mann’s “Wise Up” (“It’s not going to stop till you wise up”). Their capacity to exit the prison of the self just enough to partake of the soundtrack’s “common prayer” is both ritual transcendence and the tentative praxis of real liberation. As if in answer, a biblical rain of frogs falls from heaven.

6) The Mill and the Cross (Lech Majewski, Poland 2011)   In a windmill perched high above a broad plain teeming with figures, God is a miller grinding the terrors of history into something better, even as the Christ is being dragged to the cross. This strange, haunting and difficult film immerses us within the complex world of a single painting, Pieter Brueghel’s “The Way to Calvary,” where the Passion of Christ is relocated to the painter’s own 16th century world. Through a visually stunning use of computer imaging, we dwell within the painting’s fantastic landscape and mingle at close range with its numerous characters. The effect is astonishing, as if we are dreaming with a premodern mind. The human suffering is arduous and heartbreaking, but it does not have the last word. In the end, the dance goes on.

7) Nostalghia (Andrei Tarkovsky, Russia 1983)   All of Tarkovsky’s films practice what he called “sculpting in time,” using a contemplative camera and lengthy shots to register a deeper flow and presence than films that hurry from one incident to the next. For western Christians, the image is usually about something. For an orthodox Christian like Tarkovsky, the image is something. The viewer becomes less a spectator than a supplicant. “The aim of art,” said Tarkovsky, “is to prepare a person for death, to plough and harrow the soul, rendering it capable of turning to the good.” Nostalghia is more poetry than narrative, rhyming fire and water, dream and memory, ritual and redemption, to counter the malaise of materialism.

8) Of Gods and Men (Xavier Beauvois, France 2010)   Based on a true story of a monastic community facing martyrdom in 1990’s Algeria, this is a profoundly moving story of self-offering and radical forgiveness. Structured around the liturgical hours and seasons, its unhurried scenes of prayers and chants allow us to worship along with the monks. But they are asked to sacrifice more than praise, and their faithful willingness to take up the cross poses serious questions for our own discipleship.

9) Ordet (Carl Dreyer, Denmark 1955)   Like the parables of Jesus, Ordet (“The Word”) employs the forms and situations of the everyday world only to break open the frame of that world with the startling intrusion of an alternate reality. Dreyer’s film, like its “holy fool” Johannes, presents us with divine impossibility in perpetual tension with the way we expect things to go. It uses material means – faces, architecture, landscape, language, light – to show us the immaterial, but in the end we are led not away from corporeal existence, but rather more deeply into it.

10) To the Wonder (Terrence Malick, USA 2012)   “Love everyone. Every leaf. Every ray of light. Forgive.” This line from The Tree of Life (drawn from Dostoevsky) is the theme of every Malick film. While his work has always reflected a deep interest in philosophy and religion, his most recent films have been theologically explicit to a degree unique in American cinema. The Tree of Life covers the biblical span from Creation to Apocalypse, while To the Wonder narrows its focus to the Song of Songs’ analogy between human relationships and divine-human love. Unlike the plot-driven narratives of most films, To the Wonder unfolds in hints, glimpses, ellipses and temporal leaps. We can’t always be sure whether we are seeing events, memories or thoughts. As with Bresson, there is no psychological explaining of characters. They retain the open-endedness of their essential mystery. It’s not so much a film in the usual sense as it is a dance, a poem, even a prayer. The viewers aren’t simply invited to watch the ecstatic images, but to become ecstatic themselves.