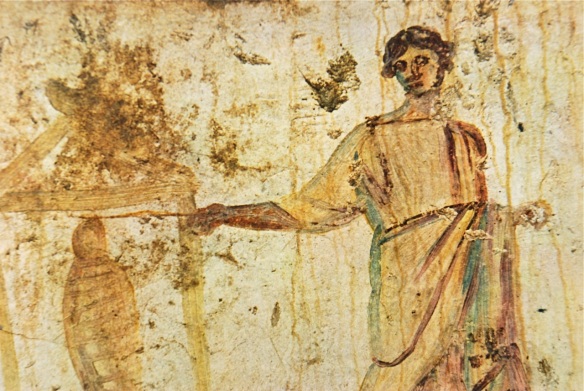 The gospel story for the Second Sunday of Pentecost[i] describes a world in which things don’t happen the way they’re supposed to.

A Roman centurion treats his slave more like a friend than a piece of property. When the slave gets sick and is close to death, the centurion implores the Jewish community to help him find a healer.

Normally, Jews and Romans were not on the best of terms. Occupying armies just don’t get much love, and besides, doesn’t everybody know that foreigners are just “not our kind?” If only we could build a wall high enough to keep them out!

But this Roman centurion has somehow made friends with the local Jewish elders. He has even built a synagogue for them. So they are happy to help.

The Roman has heard some stories about Jesus and his healing gifts, so he asks the elders to go beg Jesus, that he might come and heal his slave.

Now we’ve heard a lot of stories about Jesus getting the local clergy mad at him, so we may be surprised to learn that there were also some of them who admired Jesus, and maintained good relations with him. That is clearly the case here. And what the elders say to Jesus is this: “The centurion is worthy of having you do this for him, for he loves our people.”

So far, not much is going the way we would expect. A centurion treats his slave like a friend. A Roman loves the Jews, and the Jews love him back. And as for Jesus and the local clergy, they are getting along swimmingly.

But there are more surprises to come.

Jesus goes with the elders to find the centurion’s house, but just before they arrive, the centurion sends some friends out to say, “Lord, do not trouble yourself, for I am not worthy that you should come under my roof; that is why I did not presume to come to you myself. But only speak the word, and my servant shall be healed. For I know something about authority, since I have soldiers serving under me. I say to one, `Go,’ and he goes, and to another, `Come,’ and he comes, and I say to my slave, `Do this,’ and the slave does it.”

How strange to see a Roman officer humbling himself before a wandering Jewish rabbi. “I am not worthy that you should come under my roof,” he says.

And Jesus is “amazed.” That word in the gospel is usually applied to people who are amazed at Jesus. But here it is Jesus’ turn to be amazed. And why? Because the centurion has total faith in the power of Jesus to heal his slave, even at a distance.

“Just as I command my slaves to come and go as I wish, I believe that you have the power to command sickness and death to depart from my house. Only say the word.”

It may seem a little odd that this exchange doesn’t take place directly between Jesus and the centurion. The centurion communicates through intermediaries. This is, he says, because he is not worthy to have Jesus even enter his house. It’s a pretty extraordinary bit of deference on behalf of the powerful Roman.

In any case, Jesus turns to the crowd which has been tagging along because this was clearly the most interesting thing happening in Capernaum that day, and says, “You know what? I haven’t found this kind of faith among any of you folks who go to church. You all could learn something from this centurion fellow. You may call him an unbeliever, but he’s just given you some of the best spiritual teaching you’re ever going to get.”

And then, because this wants to be an odd story from beginning to end, the servant is suddenly well without Jesus ever saying a prayer or speaking a healing word. This miracle happens offstage, and we only hear about it later.

Notice that Jesus never actually meets the centurion or the slave. Everything happens at a distance, through intermediaries, rather the way that prayer works. We may not meet Jesus directly, in the flesh, but his effect on us is still palpable and powerful. And as the centurion believed, it is faith that makes that connection happen.

This strange little story is about a world which is repeatedly and radically disrupted: social and cultural barriers are crossed, enemies act like friends, the master/slave hierarchy is upended, earthly power humbles itself, the religious experts are schooled by a pagan outsider and oh, by the way, a healing miracle happens without any fanfare or even the slightest tangible demonstration of cause and effect. Just another day in the life of the God of surprises.

We could take a number of things from this story, but today my question is this: Who outside our own faith communities has something essential to teach us? And are we capable of appreciative amazement? Are we capable of receiving that teaching with gratitude and humility?

Where are the ones, beyond our institutional and theological boundaries, who are practicing social imagination and nurturing a better future? Where are the ones who are already doing holy work without even knowing God’s name?