Fifty years ago tonight, I was lucky enough to hear a legendary concert by two extraordinary songwriters and performers, David Ackles and Elton John. A fanciful depiction of that night in the 2019 biopic Rocket Man shows the audience rising ecstatically to float above the floor. Actually, we were all sitting around big tables, but that is pretty much how it felt to be there. For the fiftieth anniversary of that unforgettable evening, I reprise my tribute written in 2016. 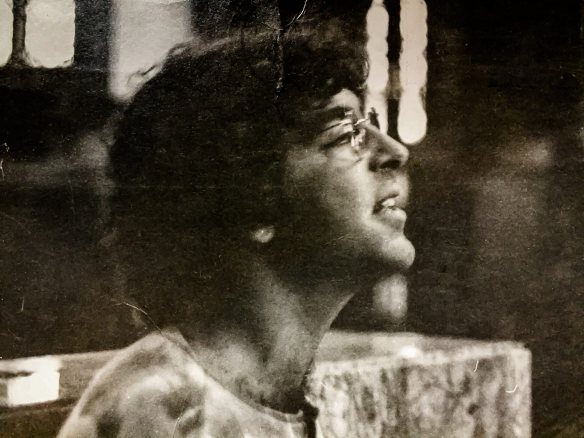 I have no explanation as to why the David Ackles albums spoke to me so intensely, but it was with those records that I probably spent the most time when I was about sixteen, listening in a darkened room, trying to imagine how everything had come to exist.”

They suffer least who suffer what they choose.

The Troubadour, an intimate club in West Hollywood, has seen some pretty special nights over the years. Joni Mitchell, Leonard Cohen, Randy Newman, Prince, Tom Petty, Pearl Jam and so many others have performed on its stage. Neil Young and James Taylor each made their solo debut there. The Byrds sang “Mr. Tambourine Man” for the first time in public. Tom Waits was discovered during amateur night. Springsteen, Dylan and Led Zeppelin dropped by after hours for legendary jams. Miles Davis and Van Morrison recorded there.[i]

When Elton John made his smashing American debut at the Troubadour on August 25, 1970, he was not yet widely known. He was originally booked as the opening act for David Ackles, a Los Angeles musical artist greatly admired by Elton John and his lyricist Bernie Taupin. But John’s record company pulled some strings to get the bill reversed. In conjunction with the release of his first album, John would become the headline act.

He would admit later to some embarrassment at being promoted above Ackles on the billing, since Ackles was one of his heroes, “one of the best that America has to offer.” Elvis Costello was also a fan, “It’s a mystery to me why his wonderful songs are not better known,” he has said.[ii] When Costello interviewed John on his Sundance cable series, Spectacle, they both voiced generous tributes to Ackles’ genius and influence, and closed the show with a duet of his great song of loss and longing, “Down River.” [iii]

Ackles put out four memorable albums between 1968 and 1973. His masterpiece, American Gothic (1972), generated critical raves. “The Sergeant Pepper of Folk,” gushed a noted British critic, astonished at its thematic brilliance, structural complexity and musical originality. Rolling Stone called it “moving” and “eloquent.” A retrospective appraisal in 2005 acclaimed it “a largely unrecognized work of genius, one of the most unfashionable and uncompromising American albums ever. . . Crafted layer upon layer, it reveals itself more as a dramatic work than a conventional rock or pop release, drawing on modern American classical composers such as Charles Ives and Aaron Copland as well as gospel, rock, blues, and soul. Imagine an art-folk album that bridges Woody Guthrie’s passionate storytelling and Kurt Weill’s orchestrations.” [iv]

Rolling Stone said at the time that American Gothic “deserves a wide audience,” but when sales proved weak, his recording company, Elektra, lost interest. Ackles made one more album on the Columbia label, but his music seemed too hard to categorize in an industry driven by identifiable genres. Was it folk, pop, classical, musical theater, or what? His originality didn’t fit the system. A ten-minute elegy to a lost past (“Montana Song”) was not going to get much radio time. And you couldn’t dance to it. But however neglected, the heartbreaking beauty of Ackles’ imagery still blooms like wildflowers on a deserted prairie:

The fallen barn, the broken plow,
the hoofprint-hardened clay;
where is the farmer, now,
who built his dream this way ?
Who felled the tree and cut the bough
and made the land obey,
who taught his sons as he knew how,
but could not make them stay. [v]

Disappointed by the lack of tangible support for his work, Ackles abandoned his recording career, but not his joie de vivre. “I’m not bitter about a thing that’s happened to me,” he told an interviewer in 1998. “I would hate for people to think I’m over here getting all twisted up about what happened 20 years ago. All that feels like another life, lived by someone else.” [vi]

Although he could write an achingly beautiful love song like “Love’s Enough,” he was at heart a storyteller, weaving poetic and sometimes tragic narratives of American dreamers and strivers, who “joined the circus, worked the fields,” but “never saved a dime.” And even when they had to “learn to dance to someone else’s song,” they managed to endure:

But I hold on to my dreams, anyway.
I never let them die.
They keep me going through the bad times,
while I dream
of the good times coming by. [vii]

Bernie Taupin, who produced American Gothic, summed up Ackles’ intensity and conviction in a 2008 remembrance: “Man! If you didn’t believe every word this guy was singing, you were dead inside.” [viii]

I first met David Ackles in early 1970, when I was working at Canterbury House in Ann Arbor, Michigan, an Episcopal campus ministry and coffeehouse known as one of the premiere folk music venues in the country. I was just out of seminary, working with two priests as an intern during the year of my “transitional diaconate,” the prelude to priestly ordination. While I was in residence, Canterbury House featured Neil Young, Doc Watson, Ramblin’ Jack Elliott, and David Ackles.

David was one of Canterbury’s most popular performers, loved not only for his music but also for his manifest warmth and wry humor. He was a lifelong Christian, deeply spiritual and theologically astute, an authentic and generous man. And though some of his songs revealed a profound empathy with the suffering of displaced souls, there was an essential core in him—a comedic faith in resurrection—which survived the harrowing descent of the artist into the nether regions of the human condition.

By summer of 1970, I was back home in Los Angeles, awaiting my ordination to the priesthood in September. When I saw that David was playing at the Troubadour, I knew I had to be there. Meanwhile, the radio was starting to preview a few unreleased songs by the other guy on the bill, and he sounded quite good as well. Word got around, excitement grew, and on August 25 the house was packed. We shared a table with Odetta, the “queen of American folk music.” [ix]

Before the show, I went backstage to ask David if he would consider singing at my ordination, and he graciously consented. While we were talking, Elton John entered the dressing room, wearing denim overalls with a cartoon duck patch on the front, to tell David how much he admired his work and how honored he was to share the stage with him.

And the concert? It’s been nearly fifty years now. Details grow hazy; I can’t recite the set lists anymore. But I can still feel the electricity of that Hollywood night, the passion of the performers, the visceral connection they made with their audience.

Stacy Sullivan, a jazz singer who once worked with David, is currently performing, in small New York clubs, “A Night at the Troubadour: Presenting Elton John and David Ackles.” While showing the brilliance of two stars aligning, her re-imagining of that night suggests the strangeness of fate: one singer became an international superstar, the other remained largely undiscovered.

The New York Times has called Sullivan’s tribute a “tour de force” which “interweaves more than a dozen Ackles songs with several of Mr. John’s hits, radically deconstructed, into a dual portrait in which their opposite sensibilities (Mr. John’s gregarious showmanship, and Mr. Ackles’ dignified introspection) eventually merge.” [x] Lucky Easterners can still see her at Manhattan’s Metropolitan Room on September 10 and October 8 [Note: this was in 2016]. I can only pray that she will do a West Coast reprise. I promise to come.

A few weeks after the Troubadour show, David sang two songs for my ordination at All Saints, Beverly Hills, where the opening hymn was “Let It Be” and large projected images filled the wall behind the altar. Those were the days! During communion, David sang “Be My Friend.” At the Dismissal, he led the congregation in “Family Band,” which he said was autobiographical, since he grew up in a musical family of church-going Presbyterians. I still play that song on my guitar every ordination anniversary:

I remember the songs we sang Sunday evening . . .
when my dad played the bass, mom played the drums,
I played the piano,
and Jesus sang the song.

David got lung cancer in the late nineties. When he went into remission, he and his wonderful wife Janice rented a Pasadena mansion, filled it with musicians, and threw a grand party for their friends, to celebrate the gifts of life and love. Then, in 1999, David departed this world, far too soon. He is dearly missed. But that gathering in Pasadena remains a joyous foretaste of the blessedness which awaits us all.

[iv] George Durbalau, 1001 Albums You Must Hear Before You Die, 2005. Along with other review quotes, found at http://www.superseventies.com/spacklesdavid.html

[v] David Ackles, “Montana Song,” on American Gothic. Some of David’s songs can be heard on YouTube, and his albums can be found online as well.

7 thoughts on “An Unforgettable Night at the Troubadour (50th Anniversary)”