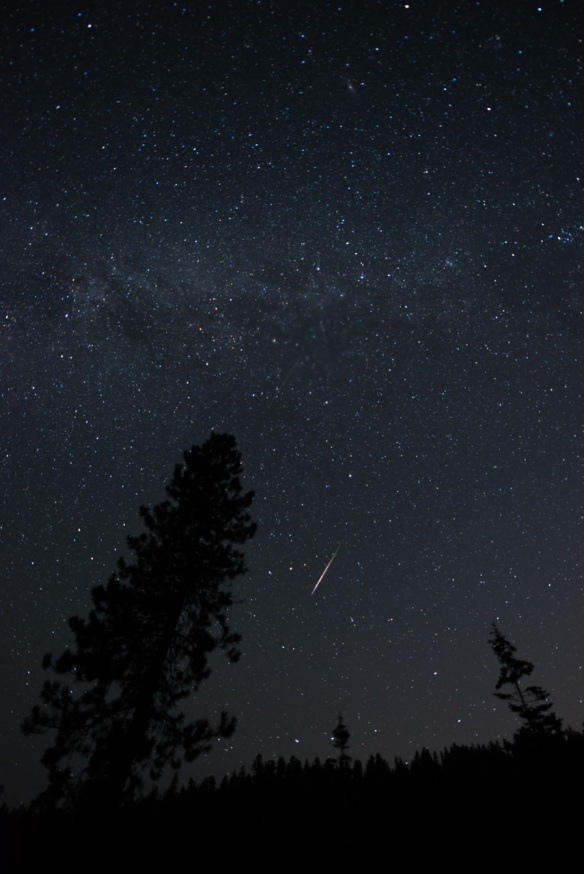 Tonight after sunset I will drive over the Cascades to a dark plain 200 miles east of Seattle to watch the Perseid meteor shower, summer’s great nocturnal spectacular. This will be the best one in five years, as there will be no moon to dilute the blackness of space. A night sky free from city lights is an awesome sight. Throw in up to 100 meteors per hour, and it is pure wonder.

Loren Eiseley, a scientist whose nature writings deeply shaped my own sensibility toward the natural world, said that “the word miraculous has been defined as an event transcending the known laws of nature … We forget that nature itself is one vast miracle transcending the reality of night and nothingness. We forget that each of us in [our] personal life repeats that miracle.”

Whether lying in an August meadow with my father as a boy, or trekking to an 11,000′ mesa to keep watch till dawn, I have been religious about keeping my appointment with the Perseids. The photograph above was taken two years ago, when I set my camera to make a series of 30-second exposures starting at midnight. This year’s peak should be about 1 am. I will keep my eyes open as best I can until first light, then drive into the rising sun to spend a week in an alpine lakes basin north of Yellowstone.

I have backpacked in the mountains of the West almost every summer since 1971. It is a week of holy obligation, a blend of adventure, beauty and silence without which my year would be incomplete and my soul undernourished. As a young priest, I helped lead many teenage backpacks in California’s Sierra Nevada. Toward the end of those week-long hikes we would devote an evening to campfire reflections followed by quiet time under the stars.

The first time we did this, I read them a passage from Loren Eiseley’s The Immense Journey, describing one of his bone-hunting expeditions in the Dakota badlands. “Fifty million years lay under my feet,” he wrote, “fifty million years of bellowing monsters moving in a green world now gone so utterly that its very light was travelling on the farther edge of space.” He then listed the chemicals in the soil of that dry and barren land, imagining the strange wild creatures they had once constituted. “The iron did not remember the blood it had once moved within, the phosphorous had forgot the savage brain. The little individual moment had ebbed from all those strange combinations of chemicals as it would ebb from our living bodies into the sinks and runnels of oncoming time.”

But then Eiseley looked up, and saw in the last light of day a flock of warblers hurrying across the sky. Like their extinct ancestors, those birds were also complex combinations of chemicals. And the very fact of their animate life in a “dead” land struck him as a perfect instance of nature transcending “night and nothingness.”

As I read, the campers’ young faces glowed with rapt attention in our circle of firelight. Everything we had experienced together in those mountains seemed transfigured by Eiseley’s words. The “natural” world, in which we lived and moved and had our being, felt radiant with wonder under the spell of his poetic perception. After the reading, we sang a few songs, then dispersed into the darkness beyond the fire to keep a time of quiet.

When I first announced that we would have a “quiet night,” some of the teens expressed concern. At other church camps, they had experienced enforced silence as somewhat uncomfortable. Being alone with one’s thoughts, particularly in the company of others, could feel awkward and unnatural. I assured them that absolute silence was not necessary, that conversations were fine, as long as they maintained the reflective spirit of the evening. So while some did go off by themselves, others engaged in thoughtful exchanges sotto voce. As bedtime neared, I returned to the fire one more time. Two girls were quietly reading to each other from my copy of The Immense Journey:

I had lifted up a fistful of that ground. I held it while that wild flight of south-bound warblers hurtled over me into the oncoming dark. There went phosphorous, there went iron, there went carbon, there beat the calcium in those hurrying wings. Alone on a dead planet I watched that incredible miracle speeding past. It ran by some true compass over field and waste land. It cried its individual ecstasies into the air until the gullies rang, It swerved like a single body, it knew itself and, lonely, it bunched itself close in the racing darkness, its individual entities feeling about them in the rising night. And so, crying to each other their identity, they passed away out of my view.

… As I walked into my camp late that night, one man, rousing from his blankets beside the fire, asked sleepily, “What did you see?”

“I think, a miracle,” I said softly, but I said it to myself. Behind me that vast waste began to glow under the rising moon.