The author at Midsummer on the Mississippi River’s Lake Pepin, Wacouta, Minnesota.

A something in a summer’s day,
As slow her flambeaux burn away
Which solemnizes me.

A something in a summer’s noon –
A depth – an Azure – a perfume –
Transcending ecstasy.

Then summer came, announced by June,
With beauty, miracle and mirth.
She hung aloft the rounding moon,
She poured her sunshine on the earth,
She drove the sap and broke the bud,
She set the crimson rose afire.

Summer arrived this morning in Puget Sound at 8:54 a.m., Pacific Daylight Time. The sun rose hours ago (5:12) and won’t set until 9:12 tonight––16 hours of sunshine! But with only 103 minutes of complete celestial darkness separating dusk and dawn, the June Solstice feels almost like the Bible’s eternal Day: Your sun shall no more go down (Isaiah 60:30). 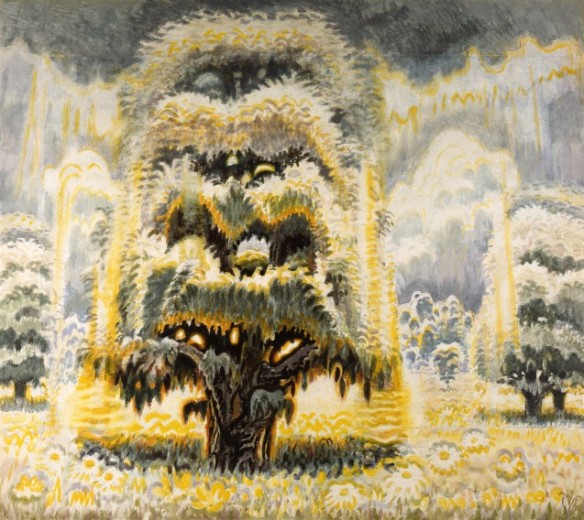 In Charles Burchfield’s painting, Summer Solstice (1961-66), we see such a world, impossibly radiant. Of the daisies and buttercups in the foreground, the painter said “they could not have even the slightest dark accent, but must be swimming in a glare of sunlight from the zenith sun, and therefore all but obliterated.”[ii]

With such amplitude of light, time seems almost at a standstill. We enjoy the absence of hurry, and bask in the “Credences of Summer” celebrated by Wallace Stevens: “arrested peace, / Joy of such permanence, right ignorance / Of change still possible.”[iii] If Spring is analogous to resurrection, summer is a type of heaven: plenitude of being, perpetual noon, luminous serenity, joyful play, cessation of care.

In high summer there is time for everything––swimming, hiking, reading, talking, tasting, singing, wandering, discovering, escaping, appreciating, savoring, loving, renewing. Time to follow a stream to its source, listen to the whisper of an aspen grove, count the falling stars, dive into a crashing wave, dance to the rising moon. Time for hammocks and porch swings as well. As my Minnesota relatives remind me, “Doing nothing is always an option!”

This image of summer as sacrament seems perfectly true when the season is at the full. But any hope for perpetual communion is illusory, the poet insisted. Change is inescapable. The fraudulent “sophistries of June” will too soon begin to fade, “Till Summer folds her miracle – / As Women  do – their Gown – / Or Priests – adjust the Symbols – / When Sacrament – is done.” [v]

In some of her poetry, Dickinson’s contemplation of the natural cycle of growth and decay––“that pathetic pendulum”–– produced a mournful catalog of loss. Flowers are “beheaded” by frost. Night’s shadow sweeps over “the startled grass.” The green world and azure sky are swept away in time’s “departing tide.” For most religious minds of the nineteenth century, the year’s fall into wintry death was prelude to spring’s rebirth and summer’s eternity. But Dickinson reversed the order, judging winter’s lifeless silence to be the culminating metaphor of human fate. As Cynthia Griffin Wolff has summarized this poetic trajectory of decay and dissolution, “Sunset’s unvarying bloodbath is the model: all life leads but to death.”[vi]

Dickinson was just being an honest observer. She watched her garden fade, the leaves fall, the birds fly south, the summer depart. She saw friends and family die. Gazing “perplexedly” on so much change and loss, with the old vocabularies of Christian hope worn thin in a century of doubt, she nevertheless yearned for a transcendence which might harmonize the paradoxical pattern of creation and destruction. She kept trying to get to heaven before they close the door. But the riddles of time and destiny could not be solved by mortal mind.

She was tempted to give up the search. “How good to be safe in tombs, / Where nature’s temper cannot reach / Nor vengeance ever comes.”[vii] But late in her life (she died at 55), she came to terms with the unknowability of the larger pattern, allowing herself a degree of trust in a larger Providence, bewildering though it may be. In a letter to a friend a few years before her death, she echoed Job’s leap of faith: “Though he slay me, yet will I trust him” (Job 13:15).[viii]

A century later, another American poet, Thomas Merton, would tell himself, “Dance in the sun, you tepid idiot. Wake up and dance in the clarity of perfect contradiction.” [ix] Dickinson knew that same dance when she wrote:

The Opening and the Close
Of Being, are alike
Or differ, if they do,
As Bloom upon a Stalk ––

That from an equal Seed
Unto an equal Bud
Go parallel, perfected
In that they have decayed ––

But Summer’s first morning is no time to ponder the riddles of temporality, or fret the far-off winter night. “Quick, now, here, now, always,”[x] open your door and lean into the freshness of the world. Run barefoot across the lawns of summer. Thank the generous sun. Breathe the golden air. Find the hidden treasure. Don’t come home till dark.

Merry it is while summer lasts

[iv] “These are the days when birds come back” is really about “Indian summer,” but the sacramental image refers to the authentic, if fleeting, heart of summer, or at least the act of remembering it.

[v] “Sophistries of June” is from “These are the days,” while “Till Summer folds her miracle” is from “It will be Summer––eventually.”

[vii] “The Clouds their Backs together laid.”

[x] T.S. Eliot, “Little Gidding,” Four Quartets. This is followed by Julian of Norwich’s “all shall be well,” as perfect a summer text as any.