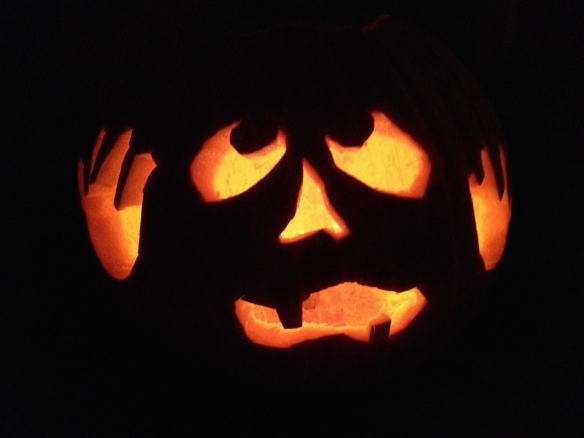 Nor dread nor hope attend
A dying animal;
A man awaits his end
Dreading and hoping all.

The Lord is my light and my rescue.
Whom then should I fear?

When children assume alternative identities to roam the streets on All Hallows Eve (Halloween), they are performing an ancient ritual of interaction between the realms of the seen and the unseen, the living and the dead. The proliferation of characters from pop culture may have diluted the otherworldly explicitness of the more traditional ghosts, monsters and witches, but the strangeness remains. Whatever the costumes may be, for one night an entire generation disappears into a procession of fantastic and otherworldly beings, disturbing the settled normality of our neighborhoods.

The American Halloween traces its origins to Samhain (“summer’s end”), the Celtic New Year marking the end of harvest and the onset of winter. As the zero point between an exhausted past and time’s renewal, Samhain (pronounced SAH-win) was considered a critical moment for both nature and humanity. Life itself hung in the balance (would Spring ever return?), and the boundary between the visible world and whatever lay beyond it grew thin and porous. Spirits, fairies, and even the human dead were thought to be abroad at such a time, because everything was at stake and everyone wanted a vote in whatever happened.

The ancient Celts were ambivalent about the disruptive presence of so many immigrants from the Other Side. They lit fires and carried jack-o-lanterns to guide and warm the spirits in the autumnal night, but also to ward them off. They set out food and drink not just for hospitality but also for appeasement. They wore masks and costumes to imitate and honor the uncanny beings, but also to scare them away, or prevent them from recognizing and harming the vulnerable humans behind the masks.

In their uneasy relationship with the mysteries of death and transcendence, were the Celts so unlike ourselves? We sense in otherness both threat and gift. It stirs both dread and hope.

I know that some Christians, both past and present, have fretted about the “paganism” of seasonal rituals, as though deep attention to the rhythms and patterns of cosmos and psyche will deform rather than enrich our collective wisdom. But I think we would do well to consider the gifts of ancestral experience in the matter of living harmoniously with time and nature. How might we use pre-Christian dimensions of All Hallows Eve, for example, to take us deeper into an authentic spiritual practice of embodied, earthly existence?

Many years ago, as liturgical artist-in-residence at St. John’s Episcopal Church in Los Angeles, I designed an All Hallows Eve ritual incorporating the Halloween themes of mortality, anxiety and the otherworldly into a eucharistic celebration for All Saints’ Day. The luminosity of saintly lives would shine even brighter, I thought, against the deepest black of our mortal uncertainty and fear.

Our publicity described the event as “an autumnal ritual to mark the season of darkening with ancient customs, wherein life and light are reaffirmed. We will conclude with a festival eucharist for All Saints’ Day.”

Many participants came dressed as their favorite saint (broadly defined to include such non-canonical moderns as John Muir, Emily Dickinson, Mark Rothko, Martin Luther King and Dorothy Day). Those without costumes were provided with a symbol to carry, such as a lantern (truth-seeker), book (theologian or writer), musical instrument (musician), or protest sign (activist). Everyone wore a mask to help us disappear for the moment into an anonymous collectivity.

Some 200 strong, with drums, kazoos and other noisemakers, we processed outside, around the block, behind a large papier-maché sun, which would soon enact for us the season’s decline into winter. When we finally made our way into the church, our only light was the flickering glow of a few dozen jack-o-lanterns scattered around the interior.

Once everyone was inside, with the sun symbol lifted high at the head of the nave, the presider said:

As the sun departs from us, depriving us of light and warmth, call to mind the things which make you afraid or anxious, the things which darken your own lives and turn your hearts cold. Consider as well all the forces and follies which threaten the health of this planet and the well-being of God’s creatures.

And when the sun has gone, take off your mask, and face the darkness with all the trust and faith that is in you. We are not alone. The true Light of the world remains, hidden within the deepest night.

Audio of flowing electronic drones began the fill the vast Romanesque space as the sun made its slow way back down the nave and out the door. Once it had disappeared, the music faded out, and with thoughtful solemnity we all began to remove our masks. Our true faces revealed at last, we simply waited in the quiet darkness with prayerful attention.

Several minutes passed.
Then an unaccompanied singer, somewhere in the dark, broke the silence:

For all the saints,
who from their labors rest,
who thee, by faith, before the world confessed.
Thy name, O Jesus, be forever blessed.
Alleluia, alleluia.[ii]

This initiated a series of theatrical blackouts depicting the saints. A spotlight would come on to show a performer employing words, music or movement to represent a particular saint. When the spot switched off, another saint was illumined in a different part of the church. There were nine saints in all.

After the final blackout, all these saints, now robed in white and carrying candles, converged toward the altar as an unseen narrator read from Revelation 7:

After that I saw a huge number, impossible to count,
from every nation, tribe, people and language,
standing before the throne and before the Lamb . . .

The saints were all standing together at the altar when the reader concluded:

They will hunger no more, and thirst no more . . .
and God will wipe away every tear from their eyes.

Then the saints all raised their candles high and shouted with one voice: “Free at last! Free at last! Thank God Almighty, I’m free at last!” The organ began to play variations on Vaughan Williams’ great hymn for All Saints as our own hand candles were lit by the saints moving among us, until everyone was joined in a luminous refutation of eternal darkness.

The eucharistic feast of the redeemed had begun,

and God, as promised,
proves to be mercy clothed in light.[iii]