“Desert Words” from “Via Negativa” worship installation by Jim Friedrich

“The trouble with going to the desert is that you risk meeting God there.” These words of a French monk, which I heard decades ago in a documentary on the Little Brothers of Jesus, have haunted me ever since. Anyone who has spent serious time in the desert knows that the monk was right. Flee the culture’s house of mirrors for the counter-world of rocks and sand, silence and emptiness, and like Elijah you too may hear the “voice of thin silence.” You may meet the necessary Other.

I wrote these words in an introduction to my Lenten worship installation Via Negativa, an experiential journey through a symbolic desert. A worship installation is more like an art gallery than the theater model of traditional Western liturgy. Instead of finding a seat and remaining there (except for the Peace and Communion), you move around, follow your own path, pay attention at your own pace, linger where something in particular calls to you. An installation also resembles the labyrinth in being a mixture of both solitude and community. You do it in your own way, yet always aware that you make the journey in the company of fellow pilgrims.

The installation introduction goes on to say:

In this installation, you are invited to make your own exodus out of the ordinary into a desert made of signs, symbols and experiences. There is no path. You wander as you will, or as the Spirit wills, though the Burning Bush is best deferred until you have spent some time here.

There is a multitude of texts: like grains of sand they are too vast to consume in their entirety. But somewhere amid those endless texts are words that may whisper a message just for you. Open a book at random. Consider the many juxtapositions of word and image scattered around the space. Read the “the shifting language of sand, traces, and mirage.”[i] Inhabit “a fragile tent of words erected in the desert” where we are “struck with infinity and the letter.”[ii]

There are also images, sounds, places to linger, practices to enact. It is better not to hurry. There is no time in the desert, only space. Wander. Explore. Abide. Pay attention. Take off your shoes. You stand on holy ground.

The installation occupies three rooms. In the first room, there are images and texts representing the “Egypt” which need to be left behind – the personal and cultural distractions, distortions, oppressions and addictions which mar or obscure the goodness of creation and the Imago Dei within us all. A monitor shows a video loop of the Exodus story from The Electronic Campfire, a video I produced of creatively told biblical stories from the Easter Vigil.

The second room contains a small tent where you can listen to a recording of sayings and stories of the early Christian Desert Fathers and Mothers, playing softly from a small portable speaker. There are printed collections of these texts available as well. Sitting on a Persian carpet inside the tent, you may linger to hear and read the wisdom of those ancient spiritual explorers. A sign outside the entrance displays a key text from that tradition: Go sit in your cell, and your cell will teach you everything.

The third room represents the desert itself, that indeterminate space free of human constructs, which for millennia has drawn the hungry of spirit. As God tells Hosea, “I will lure her into the wilderness; there I will speak tenderly to her heart.”[iii] The video artist Bill Viola describes the value of this alternate reality as well as any:

“I want to go to a place that seems like it’s at the end of the world. A vantage point from which one can stand and peer out into the void – the world beyond… There is nothing to lean on. No references… You finally realize that the void is yourself. It is like some huge mirror for your mind. Clear and uncluttered, it is the opposite of our urban distractive spaces. Out here, the unbound mind can run free. Imagination reigns. Space becomes a projection screen. Inside becomes outside. You can see what you are.”[iv]

At the entrance to the third room, a sign invites you to take off your shoes before entering the “desert.” Once inside, you begin to read, see, hear, touch, smell, taste and do:

“Via Negativa” installation by Jim Friedrich 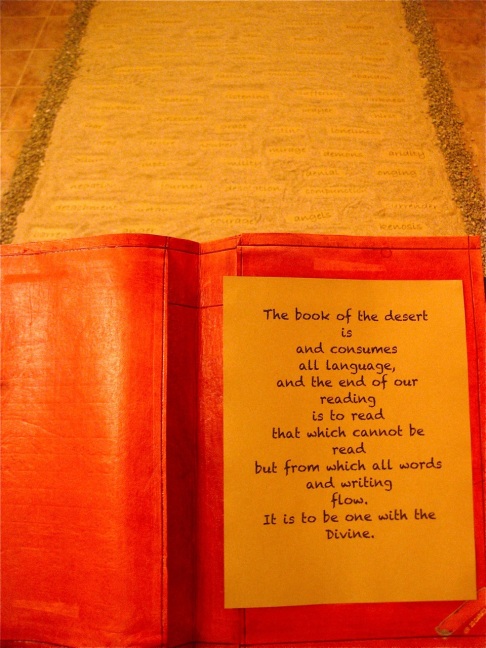 “Desert Words” from “Via Negativa” worship installation by Jim Friedrich

Of course, there is no substitute for doing the real desert in real time. I have never forgotten a solitary Lenten retreat years ago in California’s eastern Mojave – sleeping on sand dunes beneath the moon, listening to silence, trying (unsuccessfully) to pray the entire Psalter in one sitting in the cool of a remote cave. But you can’t become a desert father in a few days. My mind wandered. I failed to find the burning bush.

And yet my brief immersion in desert’s “no-where” lodged itself deep within me. The Via Negativa installation is an attempt to give it symbolic form. Like any liturgy, it compresses a universe of meaning into the space of an hour or two, providing mere glimpses and fragments. But perhaps – like any liturgy – it can plant a few seeds for God to cultivate in the fullness of time.

[vii] The first two songs are on Franke’s powerful Desert Questions album. “Holy Ground” is on In This Night.

Join 4,575 other followers
Follow The religious imagineer on WordPress.com