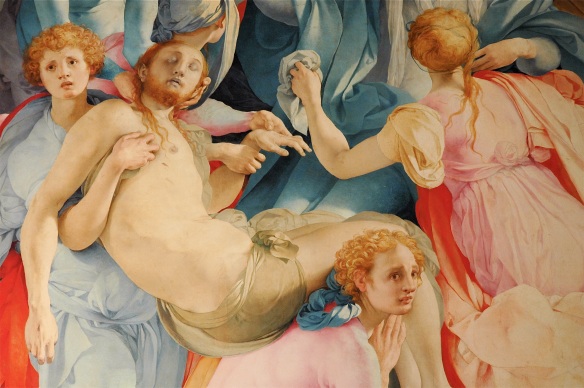 So Peter comes up to Jesus and says, “Lord, forgiveness is really hard work. When do I get to quit?”

And Jesus says, “Peter, sometimes you’re as dumb as a rock. If you want to stay with me, you can never stop forgiving.”

“But Lord, you don’t expect me to forgive everyone, do you?”

The Gospel of the Lord.

I once led a workshop exercise based on the Flood story. We all wrote on cards the types of people we thought the world would be better off without – drug dealers, terrorists, polluters, tax collectors and sinners, etc. – and we put our cards in a pile in the center of our circle. Each person had to pick a card, becoming the character they drew. Then they each had to make a case for themselves, to persuade us to let them come aboard the ark rather than be left to die in the flood. Most of us had at least one or two people we didn’t want to sail with, but some of the women – though none of the men – voted to forgive everyone.

How would you vote? Saved, or drowned?

The driver who cut you off on the freeway?
The neighbor who won’t quiet her barking dogs?
The priest who failed to visit you when you were sick?

How would you vote?

The colleague who stabbed you in the back?
The friend who let you down?
The spouse who betrayed you?

How would you vote?

The football player who knocked out his fiancé in an elevator?
The fanatics who flew the planes into the towers?
The lawyers and politicians who made torture a national policy?
The men who beheaded American journalists on YouTube?

Let’s be clear. Forgiveness doesn’t mean condoning or tolerating wicked acts. It doesn’t mean a wife should stay with an abusive husband, or that we can’t feel shock and outrage when we witness hateful instances of oppression or racism or brutality.

What forgiveness does mean is that
we don’t let those things have the last word.

We all know about this on a personal level. You may never forget a wounding encounter, but you know you can’t let it fester inside forever, you can’t give it power over you forever. At some point, you have to let it go.

Tell the truth about it, to the offender if possible, and to yourself. Don’t minimize the damage. But don’t hold on to the hurt. Don’t make your life about the hurt.

Forgiveness means leaving resentment behind. It means letting go of the reactive desire for punishment. There was a POW who said he could never forgive his captors. So a friend told him, “Then they’ve still got you in their prison.”

Rabbi Harold Kushner told a woman who was betrayed and abandoned by her husband: “I’m not asking you to forgive him because what he did was acceptable… I’m asking you to forgive because he doesn’t deserve the power to live in your head and turn you into a bitter angry woman…. you keep holding on to him. You’re not hurting him by holding on to that resentment. You’re hurting yourself.”

That’s all true as far as it goes. We can be bigger than our hurts. We can live in the present, not the past. But when Jesus told us to forgive, he wasn’t just talking about our personal well-being.

Those terrorists who committed atrocities on YouTube,
they want our rage, they welcome our hate,
because it means we are consenting to play their game of death,
adding our own tributaries of anger to their river of violence.

So we are presented with a clear choice:
Either forgive them,
or become them.

Jesus is asking something very hard of us.
Yes, maybe we can forgive the ordinary hurts of daily life.
But how can we forgive those monsters on YouTube?
That goes against human nature. That seems impossible.

Maybe it was impossible once. But Jesus, who died forgiving his own killers, has redefined what is possible. Jesus has opened the door to redemption for even the worst of sinners.

God wants to do something new with this world, and as long as we perpetuate the cycle of violence and vengeance, that new thing cannot happen.

If we say that there are some people who cannot be saved, we are limiting the power and grace of God, and we are refusing our own vocation to be God’s agents of grace and forgiveness not only for the people we know, but for the stranger and the enemy as well.

Just ask St. Paul, who reminds us this morning not to judge one another, who asks us to remember that since we all belong to God, we also belong to one another. These are the words of the man who held the coats for Stephen’s murderers while they stoned the first Christian martyr.

If that stoning had been on YouTube, we might still be holding that horrifying image in our minds, still hating Paul as a monster instead of reading his words as Scripture. Paul knew what it meant to be forgiven, and that’s why he could be so eloquent about grace.

“We all stand before the judgment seat of God,” he says.
Lord have mercy. Christ have mercy.

When Peter asked his question about forgiveness, Jesus told him a story.

A slave who owes his master a gazillion dollars is forgiven this unpayable debt, but then he goes right out and finds a fellow slave who happens to owe him fifty cents. He grabs him by the throat.
“Pay me now!” he says.
“Have mercy!” the man cries. “I cannot pay you.”
“That’s not my problem,” he says, and throws the man into a dungeon until he can pay what he owes.

It’s one of Jesus’ craziest stories, and it’s meant to be. The absurdity of the parable puts a spotlight on our own absurdity when we who have been forgiven so much refuse to pass that forgiveness on to others.

If we say we have no sin, we are only deceiving ourselves. It’s not just a matter of how we act as individuals. We must also acknowledge our inescapable participation, conscious or unconscious, voluntary or involuntary, in all the systemic processes that negate the flourishing of life on earth. Just by functioning within the habitual realities and practices of a fallen and imperfect world, we become complicit in the things that fall short of God’s intention, the things that disappoint God’s hope for us.

Perhaps you saw the extraordinary film, Of Gods and Men, which came out a few years ago. It tells the true story of eight French Catholic monks who lived in the mountains of Algeria during a time of civil war and terrorist violence in the 1990’s. Their monastery was at the edge of a poor Muslim village, where they lived in harmony with their neighbors, providing the village’s only accessible health care.

As the surrounding political violence escalated, the monks were warned by the government to leave the country. As Catholics in a Muslim country, they would be suspected of trying to make converts. Their very presence was an offense to the religious extremists. But the monks felt called to remain among the people they served, despite the high probability of martyrdom. Despite their own fears.

“If something happens to us, although I do not wish it to,” wrote Brother Michael, one of the monks, “we want to live it here in solidarity with all the Algerians, men and women, who have already paid with their lives, and in union with all unknown innocent victims.”

Their abbot, Dom Christian, wrote a letter to his family in Advent, 1993, two and a half years before he and his brother monks were beheaded by terrorists. Anticipating his own martyrdom, he insists that he is not exceptional, since so many others in that land were also at risk.

“My life,” he wrote, “is not worth more than any other — not less, not more. Nor am I an innocent child. I have lived long enough to know that I, too, am an accomplice of the evil that seems to prevail in the world around, even that which might lash out blindly at me. If the moment comes, I would hope to have the presence of mind, and the time, to ask for God’s pardon … and, at the same time, to pardon in all sincerity him who would attack me…”

What an extraordinary thing to say: Here is a good and humble and holy man confessing his own complicity in the evils of the world. And what does he hope for? He hopes for the presence of mind, in the very moment of being murdered, to ask forgiveness. Forgiveness not only for himself, but for his killer as well. As he had once said of his monastic community, “we should openly be on the side of love, forgiveness and communion, against hate, vengeance and violence.”

The last part of Christian’s letter is addressed not to his family, his loved ones, but to the unknown violent stranger who will one day kill him, the stranger whom he calls “my friend of the last moment.”

He calls his killer friend, refusing the way of violence and vengeance and hate, and by so doing he plants the kingdom of forgiveness in the very place where his own blood would be spilled by his assassin’s sword.

He commends that assassin not to hell, not to eternal punishment, but to God. A-dieu, he tells him. A-dieu: “to God.” And then he imagines a future that may seem impossible to us, but is the only future which God desires.

Listen to what he says. This is how Christian ends his letter; this is what he wants to tell the stranger who will one day cut off his head:

“And to you, too, my friend of the last moment, who will not know what you are doing. Yes, for you, too, I wish this Merci, this “A-Dieu,” because in God’s face I see yours. May we meet again as happy thieves in Paradise, if it please God, the Father of us both.”