Go not to the object; let it come to you….
What I need is not to look at all, but a true sauntering of the eye.

We need only unite our minds to the outer universe in a holy marriage,
a passionate love-match, and paradise is ours.

But nothing you ever understand will be sweeter, or more binding,
than this deepest affinity between your eyes and the world.

The poet Mary Oliver departed this world on January 17, 2019, in her 84thyear. But her acquaintance with heaven began long before, in the fields and woods of her childhood.

I went out of the schoolhouse fast
and through the gardens and to the woods,
and spent all summer forgetting what I’d been taught. [iv]

What Oliver would learn outdoors, in moments of grace, wonder, and the cultivated practice of paying attention, was the holiness and radiance of the natural world, the earthly paradise revealing itself to the receptive eye and heart.

What do I know
But this: it is heaven itself to take what is given,
to see what is plain; what the sun
lights up willingly. . . [v]

I imagine her early experiences of nature to be as formative as those of the young William Wordsworth:

There are in our existence spots of time
Which with distinct preeminence retain
A fructifying virtue, whence . . . our minds –
Especially the imaginative power –
Are nourished and invisibly repaired;
Such moments chiefly seem to have their date
In our first childhood. . .

Thus day by day my sympathies increased,
And thus the common range of visible things
Grew dear to me… [vi]

While Wordsworth’s epiphanies (“spots of time”) are ancestral to the sensibility of every modern nature poet, Ralph Waldo Emerson’s influence was even more direct in Oliver’s development. “I think of him whenever I set to work on something worthy,” she said. “He has taught me as deeply as any writer could.” [vii] Emerson’s voracious engagement with the visible world led his mind––and his readers––into its invisible depths, where “the aroused intellect . . . finds that the day of facts is a rock of diamonds, that a fact is an epiphany of God, that on every fact of his life he should rear a temple of wonder and joy.” [viii]

Persuaded that she lived in a world eager to show itself, Oliver pursued the life of a beholder:

The dream of my life
Is to lie down by a slow river
And stare at the light in the trees––
To learn something by being nothing
A little while but the rich
Lens of attention. [ix]

Writing nature––translating the world around us into words––is a complex, nuanced dance between the subjectivity of the self who writes what she sees and the elusive otherness of the not-self. How much of what we see is constructed and colored by our minds, our feelings, our cultural and aesthetic presuppositions? Is it possible to lay all that aside and become pure receptivity, a “lens of attention” which renounces the perceiver’s interpretive shaping of visible phenomena? Can we look without naming? Can we receive what is outside us just as it is and not only as we see it?

“I long to be,” said Oliver, “the empty, waiting, pure, speechless receptacle.” [x] But the very fact of longing admits defeat––such pure emptiness is unattainable in this world. Even the most receptive poet brings the particularity of self to her encounters with the wider world. And that is how it should be: our own way of seeing, whatever the proportions between shaping and receiving, is itself part of nature’s multiplicity. We do not stand over against nature in a binary opposition, but dwell within it, adding our own unique perception, feeling and response to the mix of Creation’s dance.

This requires humility and reticence on our part, so that nature does not become eclipsed by our response to it. What happens to the self in the encounter does matter, but whatever nature is prior to––or in excess of––that encounter must be honored and reverenced as well. As Sharon Cameron says in her study of Thoreau’s explorations of the world beyond his mind, “nature has an identity separate from what is felt about it.” [xi]

California’s uncompromising poet Robinson Jeffers thought it best to renounce the human altogether for the sake of an impersonal and indifferent grandeur:

Turn outward, love things, not men, turn right away from
humanity,
Let that doll lie…
Climb the great ladder out of the pit of yourself . . . [xii]

Without sharing the extremes of Jeffers’ chilly “inhumanist” philosophy, Mary Oliver also wondered about the hindrances of ego, and spoke of “vanishing” into the world. “Maybe the world, without us,” she suggested, “is the real poem.” [xiii] But as scholar Laurence Buell argues, the personal is just as much a part of nature as everything else. The goal should not be the eradication of the ego, but “the suspension of ego to the point of feeling the environment to be at least as worthy of attention as oneself and of experiencing oneself as situated among many interacting presences” [xiv]

Wendell Berry describes the inseparable relation between self and world as a dance. Contemplating an old sycamore tree on his farm, he says, “We are moving in relationship, a design, that is definite – though shadowy to me – like people in a dance.” [xv] Oliver’s poetry would devote considerable attention to this choreography of interacting presences. “What I write begins and ends with the act of noticing and cherishing, and it neither begins nor ends with the human world.” [xvi]

As with any significant relationship, the self can grow anxious about getting lost in the other, or violating the other’s integrity through domination, or drifting apart into an irredeemable state of alienation. All these have in fact occurred in our relations with the natural world. That is why a poet like Mary Oliver is so necessary. Her deep feeling for the world about her helps to repair the broken connections, retracing the forgotten path back to the garden. She leads us besides the still waters; her poems restore our soul.

When I am among the trees,
especially the willows and the honey locust,
equally the beech, the oaks and the pines,
they give off such hints of gladness.
I would almost say that they save me, and daily. . .
The light flows from their branches.

And they call again, “It’s simple,” they say,
“and you too have come
into the world to do this, to go easy, to be filled
with light, and to shine.” [xvii]

It is not always a summer noon in her poetry. Her light is aware of the shadows, though her poems spend little time on her personal struggles. Writing only briefly of her parents’ toxicity, she says, “I mention them now, / I will not mention them again.”

It is not lack of love
nor lack of sorrow.
But the iron thing they carried, I will not carry.

The shadows are deepest in “The Journey,” her most painful––and redemptive––poem.

One day you finally knew
what you had to do, and began,
though the voices around you
kept shouting
their bad advice––

The feeling of a backward suction into a vortex of melancholy and suffocation is palpable and relentless. The way forward seems impossibly clogged with stones and fallen branches. It’s like a nightmare where you can’t escape because your body has forgotten how to run. The terror of it makes the poem’s redemptive turn all the more cathartic.

But little by little,
as you left their voices behind,
the stars began to burn
through the sheet of clouds,
and there was a new voice,
which you slowly
recognized as your own,
that kept you company
as you strode deeper and deeper
into the world,
determined to do the only thing you could do––
determined to save
the only life you could save. [xix]

However autobiographical this poem may be, its impact is universal, and I suspect that “The Journey” has saved more than one reader’s life. But trauma is a rare subject for Oliver. In her writing, the more common counterpoint to joy is not pain but mortality. If you are going to write about self and nature, your subject­­s––“all that glorious, temporary stuff” [xx] ––are ever on the verge of disappearing. However much we may love what is mortal, we need to remember, “when the time comes to let it go, / to let it go.” [xxi]

Accommodating ourselves to mortality is one of the primary spiritual tasks. We may not know why death needs to happen, but we can hold it within a larger theological container, trusting there is something more to our story beyond the horizons of earthly experience.

If God exists he isn’t just butter and good luck.
He’s also the tick that killed my wonderful dog Luke. . .
He’s the ice caps, that are dying . . .[xxii]

But I believe they have between them
some fervent and necessary arrangement. . .[xxiii]

And still, whose heart is not broken every time a beautiful and beloved presence goes missing? Even an armful of peonies can bring tears, as we exclaim of their dearness, “their eagerness / to be wild and perfect for a moment, before they are / nothing, forever? [xxiv]

“Oh, to love what is lovely, and will not last!” cries the poet, cherishing the priceless worth bestowed by impermanence, while at the same time suggesting something more lasting behind the veil of appearances.

The geese
flew on.
I have never
seen them again.

Maybe I will, someday, somewhere.
Maybe I won’t.
It doesn’t matter.
What matters
is that, when I saw them,
I saw them
as through the veil, secretly, joyfully, clearly. [xxv]

Thoreau, Oliver’s predecessor and kindred spirit, perfectly described the vocation of nature’s receptive and responsive beholders: “I am made to love the pond & the meadow as the wind is made to ripple the water.” [xxvi] Thank you, Mary Oliver, for the ripples you made during “your one wild and precious life.” They continue to carry us deeper and deeper into the world. 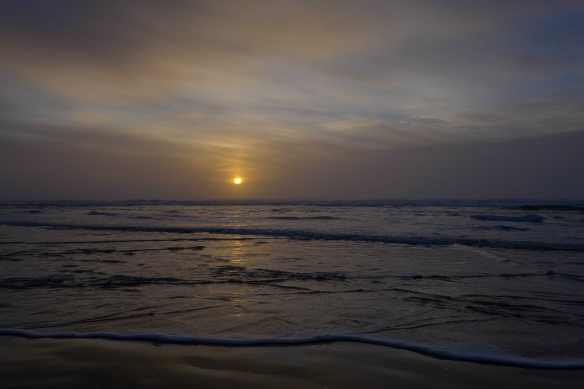 May my ashes, when you have them, friend,
and give them to the ocean,

leap in the froth of the waves,
still loving movement,

still ready, beyond all else,
to dance for the world. [xxvii]

All photographs by Jim Friedrich.

Join 4,574 other followers
Follow The religious imagineer on WordPress.com