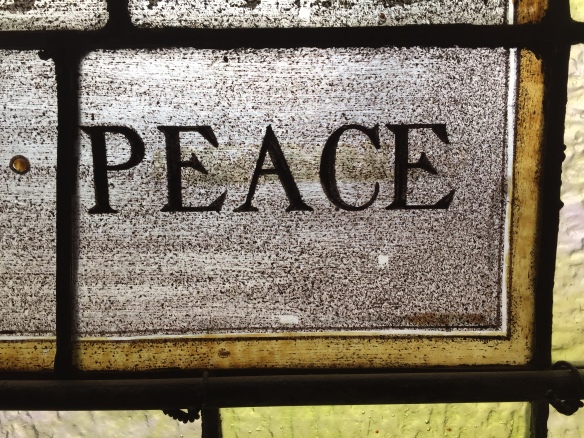 In Faith and Violence, a book published amid the political turbulence of 1968, Thomas Merton told an old Hasidic story about two men, one drunk and one sober, who were beaten and robbed as they traveled through the forest. Asked later about what had happened, the sober one described the violent encounter in vivid detail, but the drunken one seemed quite placid. “We’re all right,” he said. “Everything is fine.” Merton went on to observe that for some, faith “seems to be a kind of drunkenness, an anesthetic, that keeps you from realizing and believing that anything can ever go wrong.” But, he asked, is faith a “narcotic dream” or is it “an awakening”? Then he delivered his punch line: “What if we were to awaken to discover that we were the robbers, and our destruction comes from the root of hate in ourselves.”[i]

At a time when a brutal war was raging in the jungles of Vietnam, police and protestors were clashing in the American street, and leaders who spoke out for justice and peace were being assassinated, a monk dedicated to contemplative retreat from the world felt compelled to explore the theology of love in an age of violence, one which would “deal realistically with the evil and injustice of the world.”[ii] How do we resist the violence in our society without adding our own anger and demons into the mix? How do we resist systemic and social sin while harboring no illusions about our own capacities to do harm?

In recent days there have been numerous conversations about the escalating political violence surrounding the Trump campaign. My own post (March 12) on the topic has generated heartfelt responses of shared concern. Many of us are wondering what we can do about the situation without defaulting to our own versions of anger or fear. We need experienced guides through such tricky terrain, and Thomas Merton is one of the best.

“We no longer communicate,” Merton said. “We abandon communication in order to celebrate our own favorite group-myths in a ritual pseudo-event.”[iii] He wrote that in the Sixties, but he could have been describing a Trump rally, which, in the absence of substantive content, is mostly a ritual acting out of a group-myth, reaching its crescendo in the anticipated expulsion of protesters. As Rachel Maddow showed in a recent montage of those expulsions, Trump repeatedly asks the crowd, “Isn’t this exciting?” Roughing up protesters may express anything from personal rage to fascist methodology, but it is also entertainment. As Neil Postman has noted, Americans like “amusing ourselves to death.”[iv] When the anti-Trump signs come out, the crowd gets happy, knowing the real fun is about to begin.

This is all contemptible and sad. But I wonder: how do protestors avoid becoming unwitting collaborators in Trump’s entertainments? Even if they don’t hit back or give the crowd the finger, how do they escape complicity in a political Punch and Judy show? How do they avoid getting their own group-myths stuck in the futility of an endless ritualized dualism of “us versus them”?

Blessed are the peacemakers, for they shall be called the children of God. The peacemaker is committed to communion as the nature and destiny of humankind. As Martin Luther King said in a speech I remember from my college days, we must see the face of Christ even in the police who are attacking us with dogs and fire hoses. Or as Jesus himself taught, we must love our enemies. That does not mean capitulating to evil, or abstaining from the tainted ambiguities of political conflict. But it does mean that we ultimately belong to a much better story, where one day the tears will be wiped from every eye, the lion will lie down with the lamb, and the prodigal will be welcomed home. It means that our highest commitment is not to defeat our enemies but to make the divine love story of amazing grace come true for everyone.

As Merton wrote, “Christian nonviolence is not built on a presupposed division, but on the basic unity of [humankind]. It is not out for the conversion of the wicked to the ideas of the good, but for the healing and reconciliation of … the human family.”[v] This isn’t sentimental benevolence or passive submission. It’s a very tough form of love, as Jesus, Gandhi, King and many others have demonstrated in their costly commitment to a wider, more generous perspective than the self-righteous justifications of partisan interests. Our struggles must always reject the ultimacy of division in favor of communion. “The key to nonviolence,” Merton reminds us, “is the willingness of the nonviolent resister to suffer a certain amount of accidental evil in order to bring about a change of mind in the oppressor.”[vi]

But how do we apply this wisdom to the specific challenges of our own day? How can we respond creatively to the upwelling of anger, fear, racism and nativism poisoning our public life? In 1968, Merton compiled a list of principles for nonviolent resisters which is worth considering. While he admitted that the complexity and fluidity of events in that turbulent year could make any opinion lose its value in a matter of weeks, I believe his prescriptions retain an enduring value:

2) “be not for [oneself[ but for others, that is for the poor and underprivileged”

4) demonstrate “a desirable alternative” to violence and injustice

6) be “willing to learn something from the adversary”

7) be grounded in hope and humility – what we strive for is a gift from God’s future: not of our own making, and not yet fully here [vii]

I particularly like Number 4 (demonstrate a desirable alternative) and Number 6 (embody and manifest the Kingdom of God). It is what we do in the eucharist, where everyone is welcome, everyone practices reconciliation, and everyone shares the bread of heaven. But can we take such countercultural vision into the street?

Yes we can. There are various ways (many of which have yet to be invented!). Even into her nineties, my mother joined the “women in black” every Friday in silent vigil against the Iraq war on the streets of Santa Barbara. Their faithful witness was impossible to ignore, while at the same time it perfectly embodied the peace for which they stood.

A very different display of visionary resistance occurred at the World Trade Organization (WTO) protests in Advent of 1999. Those who watched the news only saw the Punch and Judy show of untrained police and young provocateurs turning a shoving match into a tear-gassed conflict. But the most important things that happened were not on television. This is what I myself witnessed on the day of the big rally and march[viii]:

There was a large banner which read, AN INJURY TO ONE IS AN INJURY TO ALL. It seemed a perfect summary of the gospel: “If you do it to one of the least of my brothers and sisters, you do it to me.” All in Christ, Christ in all. Solidarity forever. We were there to speak for all those whom the WTO would rather silence or forget – voices crying in the wilderness, “Prepare the way of the Lord.”

At 12:30 pm, we took to the streets, marching up Fourth Avenue. to join the thousands more who were already downtown. It was a wonderfully diverse procession: there were people dressed as Santa Claus, sea turtles, trees, and even death. But it was not some crazy fringe out there. As one writer put it, “These were the kids at UW, the ladies from church, the guys at Boeing. It was Seattle that was marching this week.”

As in all street rituals, there was a playful, carnival atmosphere. As Richard Shechner observes in his book, The Future of Ritual:

“When people go into the streets en masse, they are celebrating life’s fertile possibilities…They put on masks and costumes, erect and wave banners, and construct effigies not only to disguise or embellish their ordinary selves, or to flaunt the outrageous, but also to act out the multiplicity each human life is…They protest, often by means of farce and parody, against what is oppressive, ridiculous and outrageous…Such playing challenges official culture’s claims to authority, stability, sobriety, immutability and immortality.”[ix]

In other words, we were exhibiting the same spirit – dare I say “holy spirit”? – of playfulness, camaraderie, irony and subversion that was seen ten years ago at Tiananmen Square and the Berlin Wall and, during biblical times, at the Red Sea and the Triumphal Entry on Palm Sunday. And as faith tells us, the powers don’t stand a chance against the foolishness of God.

There were people on stilts, people carrying giant puppets, babies in carriages and elders with canes and walkers. I stuck close to the Anti-Fascist Marching Band, which played soulful New Orleans versions of “America the Beautiful”, “Battle Hymn of the Republic” and Bob Dylan’s “Masters of War.” We all just danced up Fourth Avenue …

So, my friends, how shall we do the Kingdom dance in the year of grace 2016?

[i] Thomas Merton, Faith and Violence: Christian Teaching and Christian Practice (Notre Dame, Indiana: Indiana University Press, 1968) ix-x (All quotes from Faith and Violence are in The Thomas Merton Encyclopedia (New York: Orbis Books, 2002) under the entry on Merton’s book, but I have listed the original volume’s page numbers in the footnotes.)