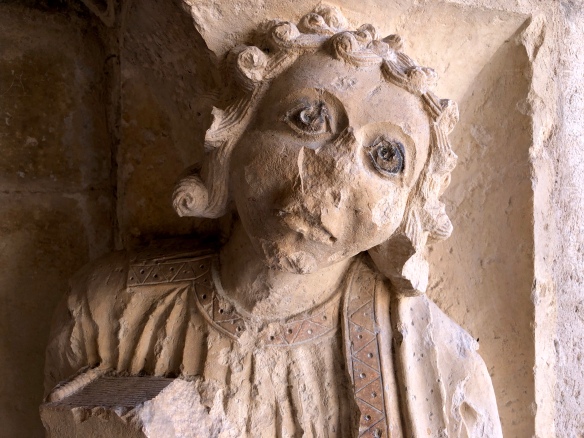 Some of these are repeated quickly, over and over, as if to hold on to them just a little longer. Sometimes Monk’s voice erupts into a staccato of syllabic non-sense, as if language is breaking under the strain of mortality, dissolving into the chaos from which new meaning may be born. Then her final words: last breath, last breath, last breath. . . The voice surrenders to silence. The piano continues on briefly, then it too makes its last sound, fading to nothing.

At year’s end, I sometimes lapse into a retrospective melancholy, thinking of people, moments, experiences and places that have come and gone in my life, some for the last time. My sense of future will revive at midnight, when we will go outside to bang gongs, beat drums and blow kazoos and whistles to welcome the New. But until then, impermanence shall be my partner in the year’s last dance. 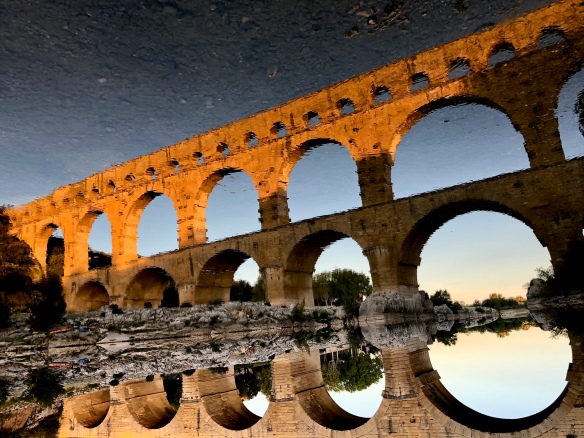 Pont du Gard, Provence (40-60 A.D.). Some things last, most things don’t. At least these stones from a vanished empire made it to the future.

I have written about temporality every New Year’s Eve since I began this blog 4 years ago. Thinking about time, memory and hope seems a ritual proper to the turning of the year. Here are links to a couple of those reflections:

But this year, anxious to get outside to enjoy the last sunny day of a rainy year, and not wanting to detain you too long from your own last things, I will simply share a bit of poetry which I discovered this week in Edward Hirsch’s marvelous survey, Poet’s Choice (2006).

In “I Take Back Everything I’ve Said,” Chilean poet Nicanor Parra offers a renunciation well suited to the New Year’s spirit of tossing out the old to make room for the new. Its brave act of repentance (more than mere regret) isn’t just for writers!

No lot could be sadder than mine
I was defeated by my own shadow:
My words took vengeance on me.

Jean-Antoine Watteau, The Two Cousins (detail), 1716. Is she gazing at memory, or a gathering future?

Catherine Barnett’s “O Esperanza” lifts my spirit after a very rough year in the history of our country and our world:

Turns out my inner clown is full of hope.
She wants a gavel.
She wants to stencil her name on a wooden gavel:
Esperanza’s Gavel.
Clowns are clichés and they aren’t afraid of clichés.
Mine just sleeps when she’s tired.
But she can’t shake the hopes.
She’s got a bad case of it, something congenital perhaps. . .

Look at these books: hope.
Look at this face: hope.
When I was young I studied with Richard Rorty, that was lucky,
I stared out the window and couldn’t understand a word he said,
he drew a long flat line after the C he gave me,
the class was called metaphysics and epistemology,
that’s eleven syllables, that’s
hope hope hope hope hope hope hope hope hope hope hope.
Just before he died, Rorty said his sense of the holy was bound up with the hope
that some day our remote descendants will live in a global civilization
in which love is pretty much the only law. 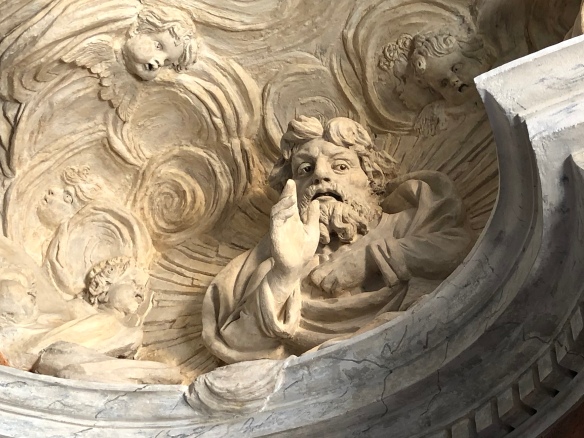 The Creator bestows a blessing above the baptismal font in Eglise Saint-Michel, Roussillon, Provence.

And finally, in “A Flame,” Adam Zagajewski provides a fine New Year’s blessing, which I share with you, dear reader, on this last day before whatever comes next:

God, give us a long winter
and quiet music, and patient mouths,
and a little pride––before
our age ends.
Give us astonishment
and a flame, high, bright.

All photographs taken by the author in 2018.