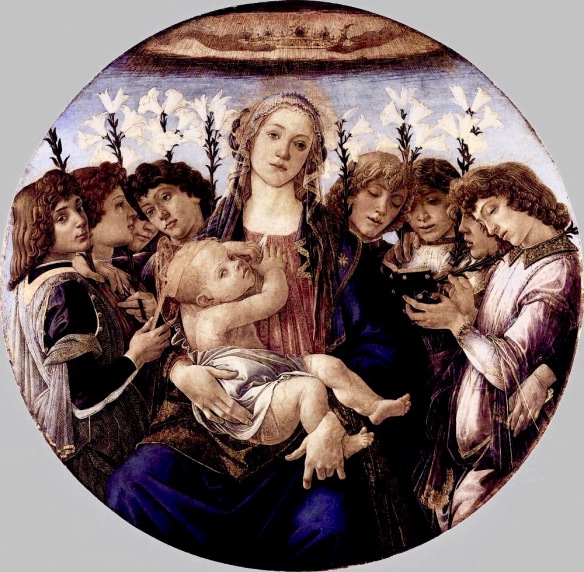 [Art] makes us see in new and different ways, below the surface and beyond the obvious. Art opens up the truth hidden and within the ordinary; it provides a new entrance into reality and pushes us through that entrance. It leads us to what is really there and really going on. Far from subjective, it pierces the opaque subjectivity, the not seeing, of conventional life, of conventional viewing, and discloses reality.[i]

The allotted function of art is not, as is often assumed, to put across ideas,
to propagate thoughts, to serve as example. The aim of art is to prepare a person
for death, to plough and harrow his soul, rendering it capable of turning to the good.[ii]

In the blood-soaked trenches of World War I, a young German chaplain found respite from horror and death by looking at reproductions of great art in tattered magazines. Even in black and white, faintly viewed by candlelight, the images revealed to him “the existence of beauty.” As soon as the war ended, he went straight to the art museum in Berlin to see, for the first time, one of the paintings which had comforted him in battle: Botticelli’s Madonna and Child with Singing Angels.

Gazing up at it, I felt a state approaching ecstasy. . . As I stood there, bathed in the beauty its painter had envisioned so long ago, something of the divine source of all things came through to me. I turned away shaken … I believe there is an analogy between revelation and the way I felt … the experience goes beyond the way we encounter reality in our daily lives. It opens up depths experienced in no other way.[iii]

Ten years later, in 1927, a middle-aged Canadian painter saw an exhibition of modernist landscapes by the celebrated “Group of Seven.” That night she wrote in her journal:

Oh, God, what have I seen? Where have I been? Something has spoken to the very soul of me, wonderful, mighty, not of this world. Chords way down in my being have been touched. . . Something has called out of somewhere. Something in me is trying to answer.[iv]

The young German, Paul Tillich, would become one of the greatest theologians of the twentieth century, while Emily Carr, at age 56, would begin her most productive period as a painter, exploring the unique spirituality of Canadian landscapes.

Tillich and Carr each had a powerful, life-changing experience in the presence of paintings. Were they describing a religious experience or an aesthetic one? Whatever distinctions might be made between the religious and aesthetic dimensions of each encounter, what they had in common was the fundamental dynamic of revelation: call and response.

Something has called out of somewhere.
Something in me is trying to answer.

Art, like religion, addresses us, hoping for a response. Art, like religion, wants to take us “deeper and deeper into the world.”[v] Art and Christianity have sometimes acted like rivals, but they really share a common task––to rescue us from what David Foster Wallace called “our tiny skull-sized kingdoms,”[vi] and awaken us to larger realities.

Gary Indiana, in his appreciation of the transcendental cinema of Robert Bresson, put it this way:

You go to a work of art and hope to be transformed. Quietly, secretly, to be roused from a waking sleep, agitated at some resonant depth in your psyche, shown something you couldn’t have shown yourself. Bresson shocks you into reconsidering your whole existence.[vii]

Not everyone welcomes this kind of engagement in art – or in religion, for that matter. Many would prefer art to remain a harmless commodity, a decoration, an amusement. The average time a museum visitor spends in front of a painting is about fifteen seconds. As for religion, how many churchgoers want a worship service to shock them into reconsidering their whole existence?

Once upon a time in the West, there was no such thing as religious art.[viii] There were simply religious beliefs and practices involving images, words, music, singing, architecture, drama and movement. But with the waning of the Middle Ages, art began to lose its preoccupation with sacred stories and theological themes. Artists turned their attention to the human being, the natural world, material objects and daily life, even as churches of the Reformation, wary of idolatry, began to strip images and ornaments from their places of worship.

Thus the typical modern narrative of art history shows religious concerns and perspectives being left in the dust with the rise of secular culture. The modern artist was expected to ignore religion or to mock it. Christian subjects and symbols, no longer a living language for many, began to lose their hold on the imaginative life of the West. Museums replaced churches as sites of popular devotion. And conventional wisdom concluded that good artists were not religious and religious artists were not good.

We do not need the obsolete props of an outmoded and antiquated legend. We are creating images whose reality is self-evident and which are devoid of the props and crutches that evoke associations with outmoded images, both sublime and beautiful. We are freeing ourselves of the impediments of memory, association, nostalgia, legend, myth, or what have you, that have been the devices of Western European painting. Instead of making cathedrals out of Christ, man, or ‘life’, we are making them out of ourselves, out of our own feelings.[ix]

Some of that same antipathy lingers today. When a symposium on art and religion was held a few years ago, two prominent art critics refused to attend. They said it would be too “painful” to sit at a table where people talk about religion and art at the same time.[x]

Christians have made their own contribution to the divide. They have not always been comfortable with the questioning spirit and expressive freedom of artists. And many churches are simply out of touch with contemporary art, failing to regard engagement with the arts as a significant spiritual practice. Nor do they foster dialogue––or collaboration––with local artists, closing the door to the possibilities of mutual exchange.

But contemporary Christianity’s greatest failing with respect to the arts may be a lack of imagination––in our worship, our formation practices, and our theological conversations. Gerhard Richter, one of the world’s most celebrated living artists, thinks “the church is no longer adequate as a means of affording experience of the transcendental and of making religion real—and so art has been transformed from a means into the sole provider of religion.”[xi] It is a troubling indictment, and I hope we can prove him wrong with a rebirth of vision and wonder in our common life.

Meanwhile, the whole tired narrative of art leaving religion behind is being reexamined. A close look at the writings and conversations of modern and contemporary artists reveals a continuing interest in the transcendent, the numinous, and the sacramental. A lot of artists may have stopped going to church or painting traditional religious subjects, but few have ever abandoned the search for meaning or depth of presence in their work.[xii]

Many iconic figures of modern art openly recognized the spirituality of their work. “I want to paint men and women,” wrote Vincent van Gogh, “with that something of the eternal which the halo used to symbolize, and which we seek to communicate by the actual radiance and vibration of our coloring.”[xiii] Jean Miró hoped painting could “discover the religious essence, the magical significance of things.”[xiv] Mark Rothko believed that both the making and the viewing of his intensely colored canvases had a sacred dimension: “The people who weep before my pictures are having the same religious experience I had when I painted them.”[xv]

There are an increasing number of well-respected Christian visual artists, such as Roger Wagner, Makoto Fujimura, and Terrence Malick, who are exploring Christian subjects, stories and symbols with fresh eyes and astonishing means. Many others, though not active in faith communities, still find in Christianity a deep language for the big questions of identity, purpose, and suffering.

The persistence of Christian subjects and images, despite the immense erosion of the Church’s cultural presence, is exemplified in the case of Barnett Newman. Only ten years after his manifesto against the “outmoded images” of western art and religion (quoted above), he began to paint one of the sacred masterpieces of modern art: Stations of the Cross (1958-1966). In fourteen large abstract canvases of minimal content, he explored Christ’s anguished scream from the cross: My God, my God, why have you forsaken me? Newman called it “the unanswerable cry,” and in each of those paintings, often with only a thin black line in tension with––even overwhelmed by––the empty space around it, he questions our place in the larger whole. What does it mean to exist, to suffer, to desire? Are we alone, ignored, or loved?

Ultimately, it is not just the intentions or beliefs of the artists, nor their chosen subjects and styles, which make their art religious, for “any art that helps us penetrate the surface of things is religious, regardless of content or creator.”[xvi]  And whether art is a mirror of the human condition, a window into beauty both immanent and transcendent, or a hammer to shatter our complacencies, it shares many of the tasks and effects of religion.

Art and faith are, each in their own way:

Art and faith, then, are fundamentally allies, though they may not always act like it. Deepening the connections between them is, I believe, part of the Spirit’s dance. Or as Cirque du Soleil’s Michel Laprise puts the question:

A bridge to a new dimension? A magnetic portal to an invisible world? Yes! Why not? The Valley of Possible Impossibles, where dreams are on standby … waiting to be ushered into the now Abandoned dreams, collective dreams, mad, mad, mad utopian dreams … the unconscious into the conscious. Duality! Oneness!

Do Not Fear: Reflections on the Venice Colloquium

“The artist formerly known as priest”

[vi] David Foster Wallace, This is Water: Some Thoughts, Delivered on a Significant Occasion, about Living a Compassionate Life (New York: Little, Brown and Company, 2009), 117.

[viii] See Hans Belting, Likeness and Presence: A History of the Image before the Era of Art (Chicago: University of Chicago Press, 1997)

Join 4,575 other followers
Follow The religious imagineer on WordPress.com