The painter gazes with speechless, loving wonder, and I whisper to myself: This is the pathway home to an immortality of bliss and beauty.

Do you observe how [God] intended that there should be moral meaning in the face of Nature, and that we should derive instruction therefrom? . . . And as I sat and looked today at the meadows and the trees, I thought within myself, “What message have they for me of my God, and from my God?”

Nature has always exerted a powerful influence upon the American imagination, whether it was seen as a howling wilderness to be tamed, a vast resource to be exploited, or a sacred gift to be treasured. Before much of this country was settled and cultivated, its unspoiled landscape was deemed a new Eden. But by the mid-nineteenth century, primeval landscapes were already in retreat, and many feared America was becoming Paradise Lost.

Landscape painting offered a powerful response to this anxiety, fostering and preserving a sense of Nature as a divine Scripture, “opening a thousand windows to show us God.”[1] Even as rapacious expansionists were subduing the continent “with the plough and the railroad,”[2] artists were giving a kind of prayerful attention to what Nature, undefiled by human interference, was showing and saying to the receptive mind and heart. As one art historian noted in 1849, “numerous modern painters are distinguished by a feeling for nature which has made landscape, instead of mere imitation, a vehicle of great moral impression.”[3] And the impression registered by painters like Albert Bierstadt or the Hudson River School was a sense of Creation as a shower of blessings suffused with divine presence, requiring of humanity both reverence and care.

But in the 1850s, darker elements began to disturb the blissful images of America’s Eden. A beautiful landscape might include the forlorn stumps of a logged forest; the distant smoke of a steam engine would register the intrusion of human technology. But westward expansion wasn’t the only trouble in Paradise. In his study of Hudson River painter Frederic Edwin Church (1826-1900), Franklin Kelly writes that “no other period in the nineteenth century was so indelibly marked by complex national issues, mounting turmoil, and increasing doubt about the destiny of the American nation.”[4] The turmoil and the doubt began to find expression in the representations and intuitions of both literature and painting. As Herman Melville wrote in Moby Dick (1851):

“Oh! time was, when as the sunrise nobly spurred me, so the sunset soothed. No More. This lovely light, it lights not me; all loveliness is anguish to me, since I can ne’er enjoy. Gifted with high perception, I lack the low, enjoying power; damned most subtly and most malignantly! damned in the midst of Paradise!” [5]

In a similar vein, the newly invented pigment of cadmium red, so dramatically applied by Frederic Church in Twilight in the Wilderness (1860), did more than document a sunset’s color with greater accuracy. To a country on the eve of war, it also conveyed a warning: There will be blood. Damned in the midst of Paradise indeed.

Church’s crepuscular scene has been called “a stained glass window burning with the intense power of divine light.”[6] But when the very future of the country was most in doubt, this silent moment just after sunset became an icon of a nation in crisis: in a time of passing away and growing darkness, could we still hope for a bright new morning? Louis Noble, Church’s Episcopal rector and close friend, saw in Twilight “that narrow, lonesome, neutral ground, where gloom and splendor interlock and struggle.” Darkness and light, like Jacob and the angel, “now meet and wrestle for mastery.”[7]

In the previous year, another Episcopalian, Martin Johnson Heade, painted an even more foreboding image of imminent calamity in Approaching Thunder Storm (1859). Over the next decade of Civil War and its aftermath, stormy weather would be a common theme not only in American landscape painting, but in political and religious rhetoric as well.

In 1863, the aptly named Noah Hunt Schenck, rector of Emmanuel Episcopal Church in Baltimore, lamented that the “thousand miseries of our fraternal strife . . . so charge the air with gloom and roll their black clouds overhead, as to leave us bowed with sorrow and groping in the dark.”[8] As the original owner of Heade’s painting, Schenk must have looked upon it the day he wrote those words.

I recently visited Heade’s painting at New York’s Metropolitan Museum, and spent a long time peering into the ominous blackness of clouds and water. The warm tonality of the foreground shore and the jutting pair of grassy spits, glowing with an eerie intensity at odds with the surrounding gloom, only increased the unsettling sense of unreality. The extreme contrasts of dark and light, hot and cool, suggest tension and instability verging on the apocalyptic. And yet the human presences––the rower on the water, the watcher on the shore––seem strangely calm. Do they not see what the painter sees––an imminent doom?

Although the preeminent role of landscape painting in the production of national identity and spiritual meaning has long since declined amid vast changes in art, culture and religiosity, Approaching Thunder Storm seemed to me as relevant to our current situation as any of the edgy political works I had seen at the Whitney Biennial a few days earlier. In fact, as the climate crisis deepens, the symbolic trope of catastrophic weather is being strangely literalized. Climate is no longer just a vivid metaphor for the threats on our horizon. It is itself becoming as grave a danger as any other. 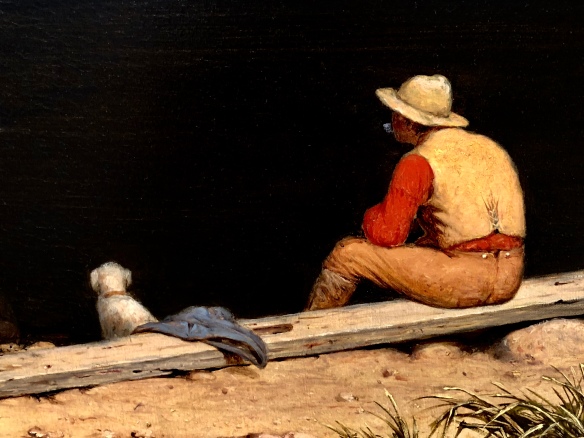 The crisis of these times may prove to be as devastating in its way as the events of the 1860s. But whether our storm clouds be the madness of presidents, the rise of fascism, or nature gone off the rails, the American body politic continues to sit passively on that broken plank––whether by ignorance, complicity, or despair, it matters little––inexplicably unable to rise, with whatever courage and hope we possess, to shout our protest to the gathering darkness:

[1] John Muir, My First Summer in the Sierra (1869, rev. 1911). Long after American landscape painters had abandoned the confident spirituality of the mid-nineteenth century, Muir translated the vision of an Edenic wilderness into political action, becoming a major voice in the movement for national parks.

[8] Noah Hunt Schenck, in “Songs in the Night,” a sermon preached on Thanksgiving Day, 1863, q. in Sarah Cash, Ominous Hush: The Thunderstorm Paintings of Martin Johnson Heade (Fort Worth, TX: Amon Carter Museum, 1994), 44. Schenck’s Baltimore parishioners were divided in their political sympathies. When prayers were said for President Lincoln, supporters of the Confederacy refused to kneel. After the war, he was glad to take a parish in New York.

[9] Cf. Mark 4:39, where Jesus rebukes the storm, and the wild sea grows calm. Weathering our own gathering storm may indeed require divine aid.